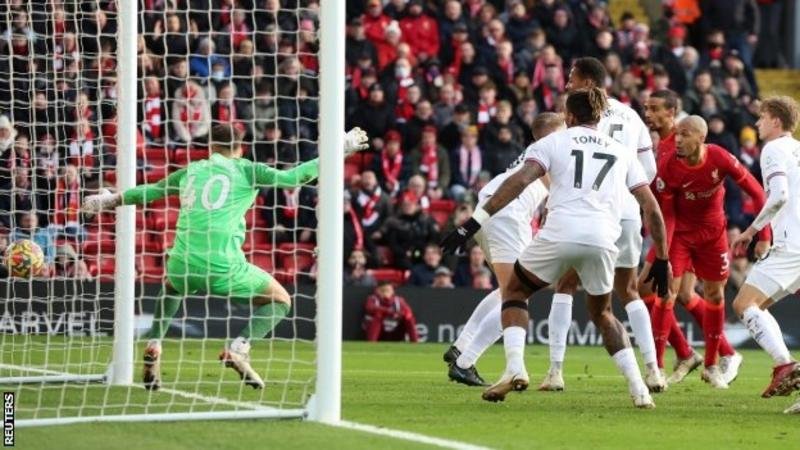 Liverpool moved up to second in the Premier League as they overcame a stubborn Brentford side to take all three points at Anfield.

Fabinho’s far-post header eased some of the tension that had built up at Anfield over 43 goalless minutes, but the home fans were relieved when Bryan Mbeumo sliced wide from a fine position after the break.

Shortly afterwards, Alex Oxlade-Chamberlain connected with an Andy Robertson cross to double the lead and Takumi Minamino came off the bench to side-foot home a third.

Leaders Manchester City are 11 points above Liverpool, having played a game more.

It will take a spectacular and sudden disintegration in the champions’ form, and a near flawless run-in from Liverpool to reverse those standings by May. City have dropped just 10 points so far this season.

Liverpool find a way without star duo
It was the first time since May 2017 that Liverpool had lined up without either Mohamed Salah or Sadio Mane for a Premier League match. And, for a while, it showed.

Liverpool had huffed and puffed to little effect against 10-man Arsenal in the Carabao Cup in midweek and once again they initially dominated possession without making an impression on the scoreline.

With Salah and Mane away on international duty, the hosts lacked the necessary guile and dexterity to prise apart the packed ranks of defenders.

The breakthrough came less than two minutes before the interval as Trent Alexander-Arnold’s corner skidded through a crowded six-yard box for Fabinho to divert in at the far post.

Brentford, with a skinny 25% of possession, had offered some threat before the opener. Ivan Toney and Vitaly Janelt were not far away with shots from a good distance out, while Liverpool’s high defensive line left them looking with relief for the assistant referee’s flag on a couple of other occasions.

And after the break Mbeumo wasted a glaring opening. Having twisted inside Joel Matip, he had a clear sight of goal, but cracked his shot wide of the post from just inside the box.

It was the key moment in the game. Liverpool, stung into action, found another gear. Diogo Jota was denied by Fernandez and rattled the post before Oxlade-Chamberlain’s diving header all but ended the visitors’ hopes.

Oxlade-Chamberlain departed with an ankle injury and his replacement Minamino took advantage after Brentford attempted to play out from the back with calamitous consequences.

The final 10 minutes were played out in open style. The home fans greeted impending victory by singing the name of their former manager Rafael Benitez, who had been relieved of his duties at neighbours Everton, as 17-year-old Premier League debutant Kaide Gordon wasted a chance at one end for Liverpool and the impressive Toney did the same for the Bees at the other.

While unable to match the draw they produced in the reverse fixture in September, Brentford are 10 points above the relegation zone and well on target to survive their first season in the top flight in 74 years.