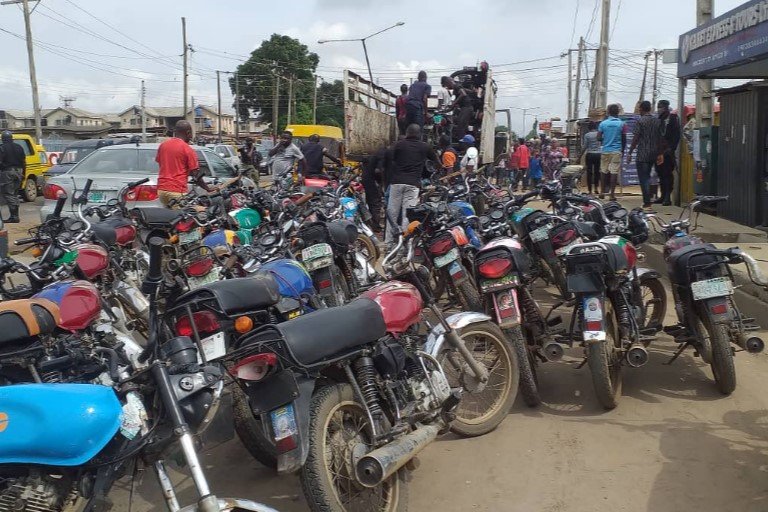 The Lagos State Environmental and Special Offences (Enforcement) Agency also known as TASKFORCE has reacted to public outcry on okada riders aggressiveness in Lagos and is set for total clamp down on all recalcitrant okada operators on Lagos Highways, to free the state from their menace and unruly attitudes threatening the security architecture of the State as encapsulated in the T.H.E.M.E.S. Agenda of Governor Babajide Sanwo-Olu.

The offences of Okada riders also include arson, mob attack of innocent citizens that may cause total breach of peace, unrestrained speed, total disregard to traffic rules and regulations.

The Unit will embark on mass raid and confiscation of all Okada found on the highways, restricted routes and prosecute both the rider and passengers who are culprits, with a view to achieving the State’s vision of zero tolerance for Okada operation.

The Chairman of the State Taskforce, CSP. Shola Jejeloye made the statement today during decoration of newly promoted officers attached to the Unit at the conference room of the Agency Headquarters, Safety Arena, Bolade, Oshodi of Lagos.

He disclosed that in January 2022 over 1,654 motorcycles known as Okada have been impounded at various locations of the State for plying restricted roads and violating the State Laws on its restrictions on major highways.

He said that the Agency had taken her enforcement for compliance activities to Ogba, Cele-Ijesha Expressway, Jakande Estate Oke-Afa, Allen Avenue, Oshodi Mile 12, Ojodu Berger, Ketu Alapere, Agric in Ikorodu, Agege areas to mention but a few in the State within the first two weeks of January this year.

CSP Jejeloye said that the restricted routes have been published severally to avoid unnecessary excuses of not being aware of the State laws on their restriction by Okada operators, but some of them chose to turn deaf ears, and all efforts put in place by the Enforcement Agency to sensitize, educate and enlighten them on the dangers of plying on the highways proved abortive.

“Hence, we have no reason not to match force with their aggressiveness and lawlessness this time around,” he said.

Speaking further, the chairman said that all the restricted routes will be closely monitored to rid the State of Okada riders’ menace which could lead to needless loss of lives and serious security challenges.

The chairman emphasised that this year’s Agency approach to tactical enforcement for compliance activities is a signal to all recalcitrant Okada riders and environmental laws offenders who circumvent Government rules and regulations as provided by regulatory provision of the law, that Lagos is no longer a safe haven for them as both the offenders and culprit shall be made to face the full wrath of the law.

Jejeloye maintained that the agency will not rest on its oars until all Okada Operators tow the line of best practices and the State is totally free from their menace. He further admonished all riders to maintain their lanes or risk arrest and subsequent crushing of their bikes.

Meanwhile, ‘‘Henceforth the agency will no longer look the other way or tolerate any act of indiscipline from illegal ticketers of okada riders who are constituting nuisance on Lagos roads as the agency will begin to arrest and prosecute them for disrupting the free flow of traffic as a result of their illegal activities’’ Jejeloye stated.
The Chaitman nothed that these people have shown disregard for the State Environmental laws in the past which the resultant effects are worrisome. He warned Okada riders and other traffic offenders to desist from plying restricted routes to avoid being caught by the long arm of the law.

“We are not unaware of their activities in all the areas in Lagos Metropolis, especially the ones mentioned on Social Media. We have been there before and we will still come back to hit them hard, this time there will be a total clampdown till they learn to abide by the rules and regulations governing their operations in the State” Jejeloye stated.

The CSP reiterated that the State Taskforce under this dispensation is poised to take the State to greater heights through efficient, effective, prompt and speedy response to any environmental and traffic challenges in order to promote a liveable, serene environment and accident free society. This is a task that must be completed and sustained.

SERAP sues Buhari, others over ‘missing N3.1bn in Finance Ministry’