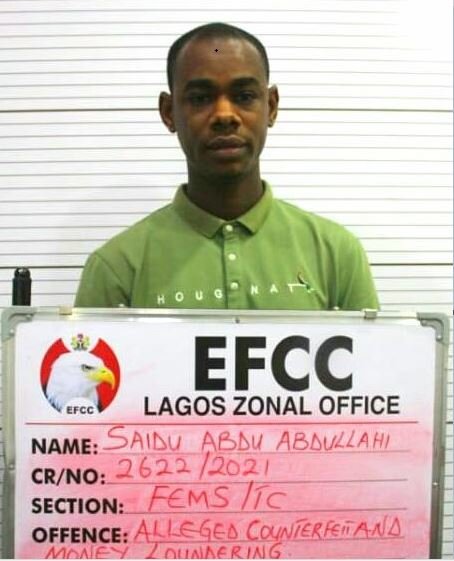 The trial of Saidu Abdu Abdullahi, a self-acclaimed Malaysian-trained software engineer, continued today, January 21, 2022, before Justice A.O. Awogboro of the Federal High Court, Ikoyi, Lagos, with the first prosecution witness, PWI, Chuks Igboerika, revealing to the court how the defendant had deposited fake Euro notes to the tune of €482,000 at the Ajah-Lekki branch of Access Bank.

Abdullahi, who was arraigned in November 2021 on a three-count charge bordering on an alleged €482,000 (four hundred and eighty-two thousand euros) counterfeit fraud, allegedly deposited the fake Euro notes 93 different times into 58 different accounts at the branch between April and August 2021.

One of the counts reads: “That you, SAIDU ABDU ABDULLAHI, on or about 30th April, 2021, within the jurisdiction of this Honourable Court, had in your possession 12 pieces of 500 Euro counterfeit bank notes knowing it to be counterfeit and thereby committed an offence contrary to and punishable under section 5(1)b of the Counterfeit Currency (Special Provisions) Act No. 22 of 1984.”

Another count reads: “That you, SAIDU ABDU ABDULLAHI , on or about 30th April, 2021, within the jurisdiction of this Honourable Court, uttered 12 pieces of 500 Euro counterfeit bank notes knowing it to be counterfeit and thereby committed an offence contrary to and punishable under section 5(1)a of the Counterfeit Currency (Special Provisions) Act No. 22 of 1984.”

At the resumed sitting today, Igboerika, who is Team Lead of Investigation at Access Bank, during cross-examination, narrated to the court how he and his team conducted an internal investigation that led to the discovery of the fake currencies.

Igboerika had earlier stated in his examination-in chief ,while being led by the prosecution counsel, Ebuka Okongwu, that the defendant deposited the total sum of €482,000 at the Ajah-Lekki Expressway branch of the bank.

He further revealed that the defendant contributed about 94% of the total Euro deposits in the branch between April and August 2021.

When asked by the defence counsel, J.H. Bashir, if he received the fake currencies, he said the currencies were received by the retail operation staff of the bank’s branch.

According to him, “However, there were complaints from some customers of the bank who claimed that the money paid to them by the bank was fake after they had travelled with it. So also another bank who received the same Euros from us complained.

“This prompted the Investigation Unit of the bank to investigate and ascertain the source of the funds, which revealed that they were deposited by the defendant”.

Igboerika also revealed to the court that the defendant did not own a foreign account with the bank, but made deposits of the said funds into third parties’ accounts, who in turn withdrew the money from other locations of Access Bank, thereby dumping the fake notes at the branch of the Bank.

He added that upon their investigation at the bank, the fake currencies were submitted to the EFCC for forensic examination, which further proved that they were indeed counterfeit money.

Responding to whether the money deposited by a customer belongs to a customer or the beneficiary, Igboerika said that a customer who makes a deposit at bank and fills the deposit slip is held accountable for any fake currency that may be discovered in the transaction.

Igboerika further told the court that the bank later found out during investigation that the currency note detector machine did not pick that the money was fake because the version of the fake currency deposited was cleared by the brand of the machine as legitimate.

This, he said, was because the machine was an older version.

Justice Awogboro adjourned the case to February 7, 2022 for continuation of trial.

Osinbajo and the burden of undeclared ambition by Lateef Adewole