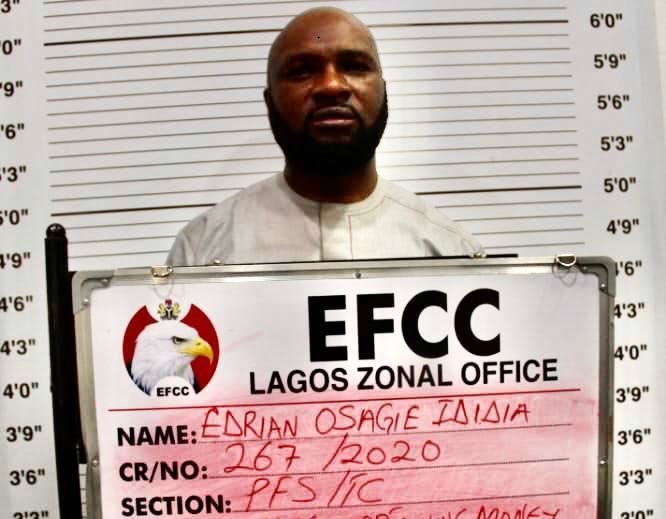 Counsel to Mr. Edrian Osagie Ididia who was arraigned before a Lagos Special Offences Court over an alleged N84 million fraud, has accused the Economic and Financial Crimes Commission, EFCC, of intimidation and harassment, stressing that his client is not a fraudster.

Ididia is facing a two-count charge bordering on stealing and obtaining money by false pretense.

He was alleged to have defrauded one David Mark Umeh, to the tune of N84 million.

Speaking to the journalists on Friday, his lawyer, Victor Chinedu, of Graylaw Partners, declared his client’s arrest and arraignment, as unjust and abuse of power.

He stated that the complainant in the matter, Mr. David Mark Umeh instead of addressing his civil wrong through the courts, chose to use EFCC as a tool of intimidation and harassment against his client.

The lawyer also narrated how his client was allegedly kept in EFCC custody for about two months and how he was denied administrative bail.

The lawyer said: “Our client (Edrian Ididia) honoured the invitation of the EFCC by walking into their office on 4 November 2021. He has been unjustly kept in custody since that day and was severally denied bail administratively having fulfilled all requirements requested by the commission without being charged to court.

“After so much power muscling and tussle and incessant disobedience of the court order of the honorable Justice Daniel Osiagor, so a contempt proceeding was filed and served on the EFCC on the 24th day of January 2022.

Contrary to the publication of the 26 January 2022 that the said allegation was a failed business transaction between two business associates, rather than Mr. David Mark Umeh, addressing his civil wrong, he chose to use EFCC as a tool of intimidation and harassment against the defendant.

“This buttresses the media trial in which the EFCC throws in the face of a right-thinking person against the integrity of our client”.

Sergio Mattarella, 80, set to stay on as Italy president

Why APC is focused on the common man’s welfare- Osinbajo