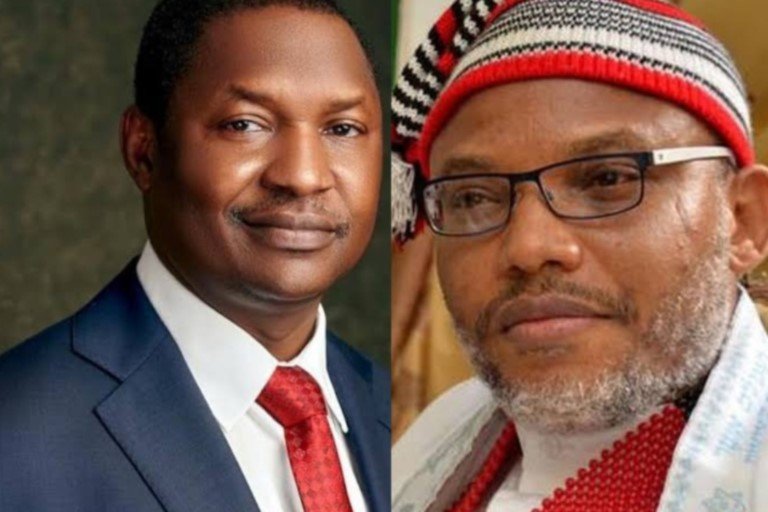 A High Court in Umuahia, Abia State on Wednesday ordered the Federal Government to pay the sum of N1 billion to Nnamdi Kanu, leader of proscribed Indigenous People of Biafra (IPOB).

In a suit filed by Kanu’s counsel, Aloy Ejimakorm, against Abubakar Malami, Attorney-General of the Federation (AGF), he accused the government of allegedly violating his fundamental human rights.

Joined in the suit is the Director General of the Department of State Services (DSS), Yusuf Bichi.

Other respondents include Federal Government of Nigeria (first), Chief of Army Staff (third), Inspector-General of Police (fifth), and three others.

Amongst other reliefs sought in the suit marked HIH/FR14/2021, Kanu asked the court to compel the respondents to pay him N5 billion in damages as monetary compensation for the “physical, mental, emotional, psychological and other damages” suffered as a result of the alleged infringement on his fundamental rights.

He also sought damages for the invasion of his father’s house on September 10, 2017, by the military.

Delivering judgment on Wednesday, Benson Anya, the judge, described the invasion of Kanu’s Afaraukwu residence as notorious and brazen.

He also ordered the Federal Government to issue a public apology to Kanu in three national dailies and advised that a political resolution be adopted in resolving Kanu’s case.

Related Topics:IPOBNnamdi Kanu
Up Next