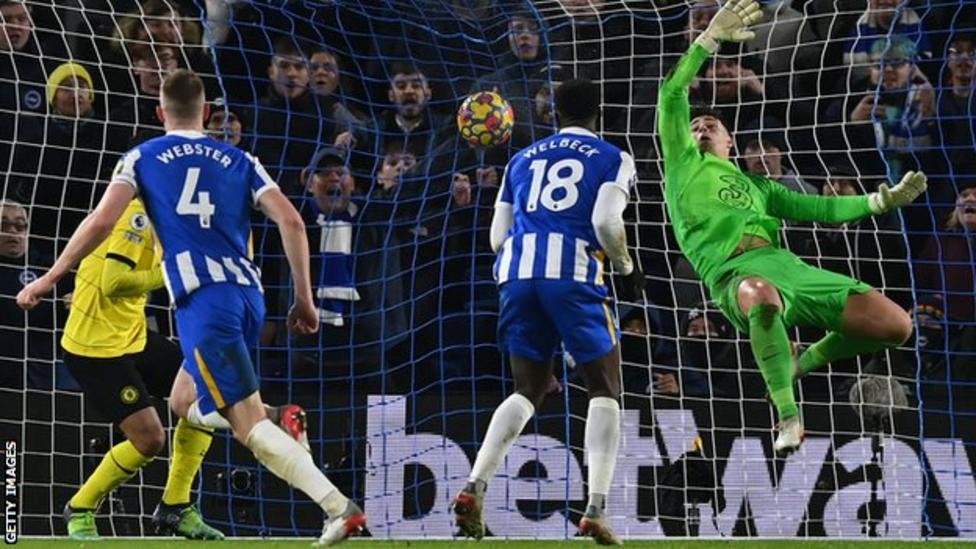 Brighton provided another huge blow to Chelsea‘s dwindling hopes of winning this season’s Premier League title by coming from behind to claim a well-deserved draw at the Amex Stadium.

Adam Webster found all the space he needed to head in from a corner in the second half and give the home side a point to reward a display full of energy and endeavour.

Thomas Tuchel’s side started poorly and lacked authority throughout, opening the scoring against the run of play through Hakim Ziyech’s well-struck low drive from outside the box.

But they failed to build on the moment, never looking assured, and for all their desperate intent simply could not find a way to restore their lead and claim the vital win.

The gap between the third-placed Blues and imperious leaders Manchester City is 12 points, with Thomas Tuchel’s side having played a game more – surely an insurmountable gulf.

Brighton are now unbeaten in six games in all competitions and continue to grow in confidence and class under Graham Potter.

Thomas Tuchel has failed to get Romelu Lukaku firing

Lifted by their equaliser, they looked the side far more likely to win the game in the final 30 minutes, instead having to settle for a point that leaves them on 29, three short of a European qualification spot.

Brighton can take great pride in being the bookends for a 21-day period that has seen Chelsea’s title hopes dwindle.

The two points Albion have claimed from those games will do less for their own league standing than the four they have denied the Blues will do to damage theirs, but they are symbolic of the huge strides this side is taking under Potter.

Brighton has gradually but consistently risen under Graham Potter

In both of those games, Brighton have had to come from behind, but each time a draw was the least they deserved against a side packed with elite talent, managed by a coach Fifa consider the best in the world and with fresh memories of European glory.

At Stamford Bridge they managed 18 efforts at goal before Danny Welbeck nodded in the last of them in injury time.

The stats say they had eight shots in total at the Amex, but this barely does justice to the pressure they applied, the territory they claimed and the promising openings that went begging but for a misplaced pass or a last-gasp interception.

Despite having first-choice forward pair Neal Maupay and Leandro Trossard on the bench until the latter stages, the Seagulls looked a constant threat. Jakub Moder fired just wide early on, Welbeck fluffed a couple of shots, crosses flew regularly through the box as the European champions dug in.

Webster’s equalising header from Alexis Mac Allister’s corner was as good as any you will see – powerful and precise after a run to evade a marker and into space.

The harshest critic might suggest that Albion have once again failed to make their dominance count – something Potter’s side were booed off the pitch for here not too long ago.

But this is a side punching way above its weight and on the up.

Chelsea a shadow of their former self

The last 21 days have been punishing for Chelsea. Seven games played in all competitions, three league points taken from a possible 12.

Tuchel reiterated afterwards the physical and mental tiredness that his injury-depleted side are suffering, showing that even one of the biggest, most expensively assembled squads is not immune to human frailty.

At their best last season, the Blues were a machine, strong-arming opponents into submission through a dominance of possession and tactical superiority. Here they struggled to match the intensity of their opponents and never looked in control.

It was telling that Ziyech did not celebrate his goal against the run of play, a reflection perhaps of the the fact the result was far from a foregone conclusion.

And so it proved, with Webster evading sloppy marking to level and deny the visitors another clean sheet. They have now kept just two in their past 13 games.

The Blues have now also failed to win any of the past four Premier League games in which they have scored first – hardly the trait of potential champions.