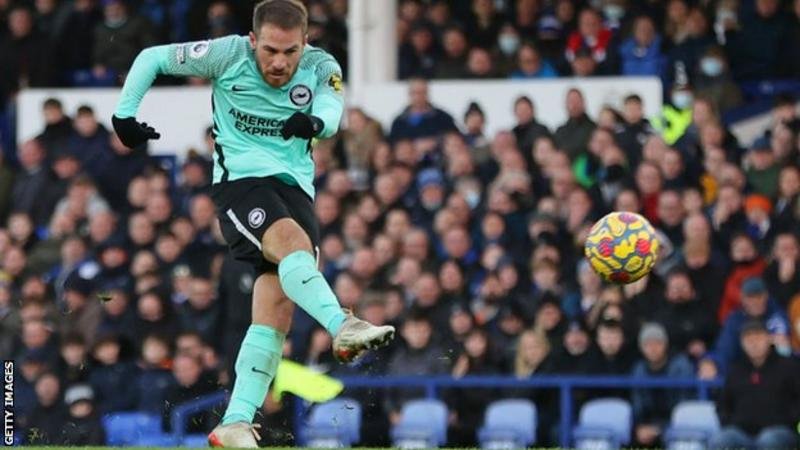 Brighton piled more pressure on Everton manager Rafael Benitez as the Seagulls climbed to eighth in the Premier League with victory in an entertaining match at Goodison Park.

Alexis Mac Allister scored a third-minute opener for the visitors following Neal Maupay’s cushioned header and Dan Burn headed in when unmarked at the back post to double the lead after 21 minutes.

The returning Dominic Calvert-Lewin, absent through injury since August, had the chance to respond from the penalty spot after referee John Brooks reviewed Enock Mwepu’s challenge on Anthony Gordon – but he fired his spot-kick over.

The half-time whistle was met by jeers from the home support but Gordon gave his side hope of a fightback with a deflected shot eight minutes after the restart.

Allan drew a superb save from Brighton goalkeeper Robert Sanchez as Everton chased an equaliser but Mac Allister’s excellent second from the edge of the box put the away side back in control.

Gordon’s second with 14 minutes remaining made for a tense finish, but he was unable to complete his hat-trick with a late chance and Everton remain 15th with defeat.

It is one defeat in seven league games for Brighton, who followed up their draw against Chelsea at Stamford Bridge with this fine performance against Benitez’s stuttering Everton.

The Seagulls had never previously won at Goodison but Mac Allister’s early breakthrough, teed up by Maupay from Joel Veltman’s cross, set the tone for a second victory in three games.

Slack defending allowed Burn to head in unchallenged after Mwepu flicked on Mac Allister’s corner – and Calvert-Lewin’s penalty miss ensured Potter’s side had control at the break.

Everton’s most recent game was 17 days ago, after matches against Newcastle and Burnley were postponed, and that 1-1 draw with Chelsea temporarily eased the pressure on Benitez.

The long-awaited return of Calvert-Lewin from injury is a huge boost for the Toffees boss, whose side managed only one win in 11 league matches in his absence.

Rafael Benitez is under pressure at Everton

Calvert-Lewin’s previous appearance – and goal – came in a 2-0 win at Brighton on 28 August as the 24-year-old scored in three successive games at the start of the season, but he could not inspire his side on Sunday.

The England striker was unable to steer in Gordon’s cross as he sought to make amends for his spot-kick miss, while Brighton threatened to wrap up the three points before the interval through Adam Lallana and Maupay.

Everton were much improved after half-time and gained a fortuitous lifeline when Gordon’s strike deflected in off Lallana.

Gordon’s performance offered a real positive on another disappointing afternoon for Everton and the lively 20-year-old responded again for his side from Jonjoe Kenny’s cross after Mac Allister had scored a third for Brighton.

Despite their late resurgence, Benitez’s side could not rescue a late point. Their 19 points from 18 games is the fewest they have had at this stage since the 2005-06 season.