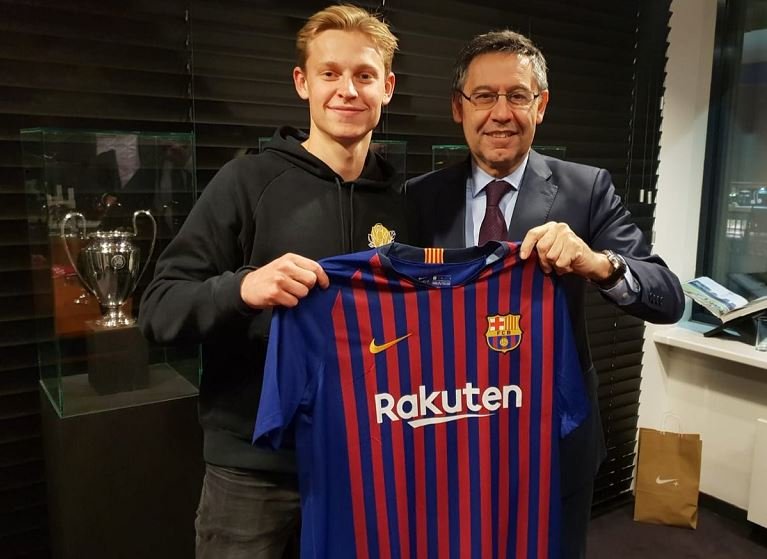 Real Madrid or Barcelona must spend 350 million euros (£292m) to sign Norway striker Erling Braut Haaland from Borussia Dortmund, a figure that includes the 21-year-old’s transfer fee, wages across a six-year deal and commissions paid to his father and agent Mino Raiola and his father. (Marca)

Everton and manager Rafael Benitez have agreed to part company, with talks continuing over the details of his departure. Duncan Ferguson, who is part of Benitez’s coaching team, has been asked to take over as caretaker manager. (90 Min)

Chelsea must increase their £33m offer if they want to sign Barcelona‘s Frenkie de Jong. Barca are demanding 60 million euros (£50m) for the 24-year-old Netherlands midfielder, who is also wanted by Bayern Munich. (El Nacional – in Catalan)

Erling Braut Haaland has been linked to a number of clubs

Interim boss Ralf Rangnick has grown frustrated with Manchester United’s reluctance to back him in the transfer window and is concerned over how much influence he will hold when he begins his two-year consultancy role in the summer. (Mirror)

Paris St-Germain boss Mauricio Pochettino has been linked with taking over as Manchester United manager but, with no direct talks between the two parties, another major European club is also interested in the Argentine’s services. (Telegraph – subscription required)

Denmark midfielder Christian Eriksen, who suffered a cardiac arrest at Euro 2020 in June, has had approaches from several Premier League clubs and the 29-year-old hopes to finalise a move to one of them by the end of the week. (Times – subscription required)

Egypt forward Mohamed Salah is refusing to budge on a belief he is worth £400,000-a-week to sign a new contract with Liverpool. The 29-year-old’s current deal runs out in the summer of 2023. (Mirror)

Newcastle United are expected to resume talks with Sevilla next week over the signing of 28-year-old Brazilian centre-back Diego Carlos. (90 Min)

Newcastle have had a bid of more than 40 million euros (£33.4m) for 20-year-old French defender Benoit Badiashile turned down by Monaco. (Foot Mercato via Get French Football News)

Newcastle are pushing ahead with attempts to sign Napoli’s 27-year-old Germany winger Robin Gosens, who has been out injured since September. (Sky Sport Italia – in Italian)

West Ham face stiff competition from Newcastle for Manchester United’s England midfielder Jesse Lingard, who will be out of contract in the summer. Lingard impressed on loan at West Ham last season, but Newcastle are willing to pay £3m to sign the 29-year-old this month. (Star)

Barcelona are interested in signing Roberto Firmino from Liverpool, who want 20 million euros (£16.7m) for the 30-year-old Brazil striker. (El Nacional – in Catalan)

Atletico Madrid have no intention of selling 22-year-old Portugal striker Joao Felix in January or in the summer. (Marca)

Wolves are closing in on the £3m capture of 21-year-old Portuguese winger Chiquinho from Estoril on a long-term deal. (Athletic)

BREAKING: Djokovic to be deported after court rejects visa appeal