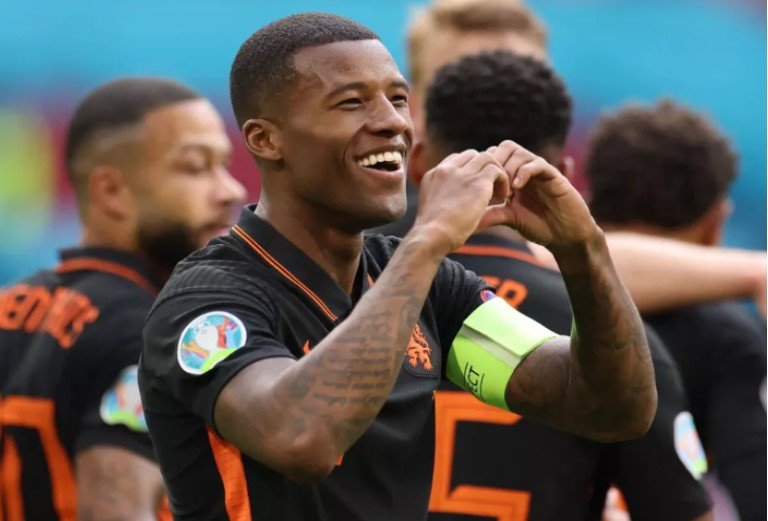 Paris St-Germain and Netherlands midfielder Georginio Wijnaldum, 31, is open to a move to Arsenal. (Sky Sports – via Mail)

Tottenham have had an offer of around £38m rejected for Porto’s Colombia winger Luis Diaz, 25. (Guardian)

Newcastle will not be signing Brazilian defender Diego Carlos as Sevilla have decided to keep the 28-year-old. (Fabrizio Romano)

Jesse Lingard’s proposed loan move to Newcastle is on the brink of collapse because the Magpies are unwilling to pay the loan fee Manchester United are demanding for the 29-year-old England forward. (Athletic – subscription required)

The Magpies have made an offer of around £30m for Lyon and Brazil midfielder Bruno Guimaraes, 24. (Guardian)

Liverpool and Manchester City are the clubs most interested in signing 24-year-old Leicester and Belgium midfielder Youri Tielemans. (Fichajes – via Leicester Mercury)

Juventus have reached an agreement to sign striker Dusan Vlahovic from Fiorentina, ending any chance for Arsenal to lure the 21-year-old Serbia international to Emirates Stadium. (Goal)

Brighton are monitoring Tottenham midfielder Dele Alli with a view to making a loan move for the 25-year-old, but Burnley, Everton and Newcastle are also linked with the Englishman. (Mail)

Southampton are also considering a move for Alli. (Telegraph – via Daily Echo)

Brentford have increased their offer for Nottingham Forest midfielder Brennan Johnson and the 20-year-old Welshman is also being monitored by Newcastle. (Independent)

West Ham are considering a move for Croatia and Marseille defender Duje Caleta-Car, but are being put off by the £20m asking price for the 25-year-old. (Talksport)

Everton owner Farhad Moshiri is overruling the Toffees board in pressing ahead with the appointment of Vitor Pereira as manager, with club executives wanting to take their time before making a decision. (Mirror)

Newcastle will miss out on Atalanta midfielder Robin Gosens as Juventus look set to sign the 27-year-old Germany international. (Goal)

Arsenal goalkeeper Bernd Leno, 29, is pushing for a move away from the Emirates, with Newcastle interested in signing the Germany international on loan until the end of the season. (Football.london)

AC Milan are eyeing a move for Arsenal’s Pierre-Emerick Aubameyang. The 32-year-old Gabon striker is said to have rejected an offer from Saudi Arabian side Al-Nassr. (Football Italia)

Red Bull Salzburg and USA midfielder Brenden Aaronson, 21, has refused to be drawn on a move to Leeds United. (Yorkshire Post)

Tottenham are in talks with Fiorentina over a loan deal for 25-year-old Morocco midfielder Sofyan Amrabat. (Standard)

Wales midfielder Aaron Ramsey will be frozen out of the Juventus squad if he does not leave this month, with Crystal Palace, Newcastle and Burnley linked with a move for the 31-year-old. (Il Bianconero via Mail)