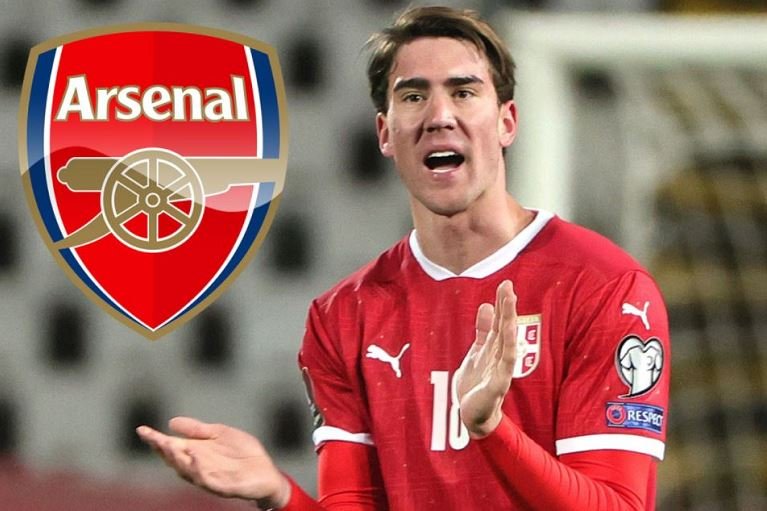 Arsenal have submitted a 70m euro (£58.6m) bid for Fiorentina striker Dusan Vlahovic. The 21-year-old Serbian striker has scored 17 goals in 21 Serie A appearances this season. (Tutto Mercato – in Italian)

Newcastle United are hopeful of signing Burnley defender James Tarkowski, with Burnley willing to take a bid for the 29-year-old Englishman. (Sun)

Representatives of Sevilla defender Diego Carlos are trying to persuade the club to sell him to Newcastle. The Magpies are keen on the 28-year-old Brazilian, with the Spanish club wanting around £60m. (90 min)

West Ham want to sign Everton and England striker Dominic Calvert-Lewin, but Everton are asking £60m for the 24-year-old. (Sun)

Burnley want to sign Juventus midfielder Aaron Ramsey, 31, on loan until the end of the season. Juve boss Massimiliano Allegri has confirmed the Welshman will leave the club in January. (Sun)

Real Madrid manager Carlo Ancelotti says Eden Hazard is set to stay at the club. The 31-year-old Belgian winger has been linked with a return to the Premier League this January. (Mail)

Manchester City are set to beat Real Madrid to the signing of River Plate forward Julian Alvarez. The 21-year-old Argentine has been labelled the new Sergio Aguero, with Barcelona and Bayern Munich also interested. (Star)

Aston Villa are interested in signing Juventus midfielder Rodrigo Bentancur. The Uruguayan has made 18 Serie A appearances this season. (Mail)

West Ham have pulled out of the race to sign Wolves winger Adama Traore after being told the 25-year-old Spaniard is signing for Tottenham. (Football Insider)

Chelsea have joined the race to sign Stuttgart left-back Borna Sosa, 24. The Croatian international was a target for Aston Villa earlier in the window, with Inter Milan also interested. (Sky Deutschland’s Marc Behrenbeck on Twitter – in German)

Liverpool have distanced themselves from signing Borussia Monchengladbach midfielder Denis Zakaria. The 25-year-old Switzerland international was initially linked with a move to Anfield. (Liverpool Echo)

Atletico Madrid are keen on signing Chelsea left-back Marcos Alonso. The Spaniard, 31, is said to be a target for the La Liga side. (Marca)

Arsenal are close to securing an 18-month loan deal for Juventus midfielder Arthur Melo. Juve are willing to let the 25-year-old Brazilian go if they can bring in a replacement. (Tuttosport – in Italian)