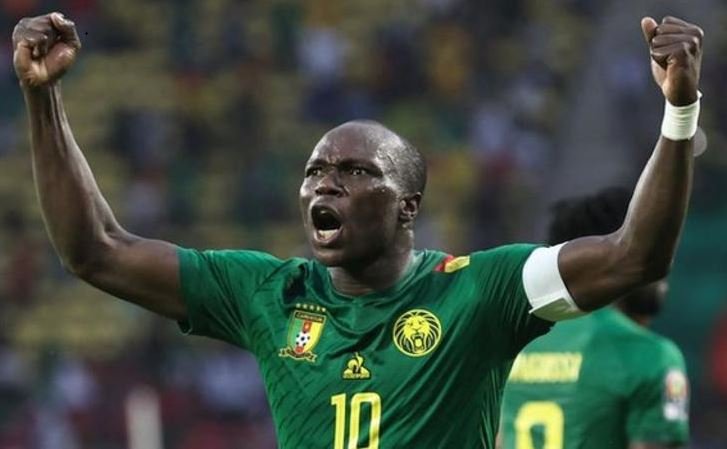 Hosts Cameroon became the first team to qualify for the last 16 at the Africa Cup of Nations with an emphatic 4-1 win over Ethiopia in Group A.

Hotessa Dawa slid home after four minutes but the hosts were level after eight as Toko-Ekambi headed home.

In the second half, Aboubakar struck twice, and Lyon’s Toko-Ekambi then added his second after 67 minutes.

Cameroon are certain to qualify for the next stage as one of the best four third-placed sides at the very least, but will win their group if they avoid defeat against Cape Verde on Monday.

After scoring two penalties as the Burkinabe were beaten 2-1 on the opening day, Cameroon captain Aboubakar is the tournament’s top scorer – with his header and tap-in taking him to four goals.

He now has a record of five goals from 10 Nations Cup games, a marked improvement from his first eight games, which produced just one goal – the winner itself in the 2017 final.

The Indomitable Lions, who are seeking a sixth Nations Cup title for Cameroon, have now won six games in a row – and have both feet in the last 16, with six points to their name.

Cameroon had to work hard to secure their 2-1 win against Burkina Faso, riding their luck at times before the Stallions ran out of energy and ideas.

As they did on Sunday, coach Toni Conceicao’s side had to come from behind to win but this time they were convincing victors as their array of Europe-based stars overpowered a side whose players are all based in Ethiopia’s domestic league.

Hotessa’s early goal, though, showed other teams that Cameroon’s defence can be exposed, as Collins Fai switched off and allowed the Ethiopia striker to get ahead of him and tap home Amanuel Gebremichael’s low cross.

But the comeback was impressive as all three of Cameroon’s forwards were involved in their instant equaliser.

Eric-Maxim Choupo-Moting and Aboubakar combined – before the latter’s fiercely struck but well-saved shot spilled to Fai, who atoned for his error when finding Toko-Ekambi with a perfect cross to make it 1-1.

Karl Toko-Ekambi celebrates one of his two goals against Ethiopia

As in the first period, Cameroon needed just eight minutes to score once the second got under way, and Fai was at it again – floating in another inch-perfect delivery that Aboubakar gobbled up in familiar fashion, heading down and firmly past the keeper.

Just two minutes later, it was 3-1 as Aboubakar showed his power on the floor this time, charging forward to bustle home a low cross along the six-yard box from Moumi Ngameleu.

Toko-Ekambi grabbed his second as he latched on to an inviting pass from impressive Napoli midfielder Andre-Frank Zambo-Anguissa before turning inside two defenders and drilling home.

While Cameroon impressed with their energy and free-flowing play, the scoreline was a little harsh on Ethiopia, who could easily have ended the game with more than one goal.

Both Abubeker Nasir and Hotessa wasted decent opportunities in the first half with the latter also guilty of spurning a fine chance in the second half.

Their best second-half opportunity fell to Bezabih Melayu three minutes from time but he failed to hit the target with the goal gaping after the ball fell kindly to him in the box.

There was still time for right-back Fai, who has never scored for Cameroon, to hit the post, just as Zambo-Anguissa did earlier in a game that entertained from the start in Yaounde’s Olembe Stadium.