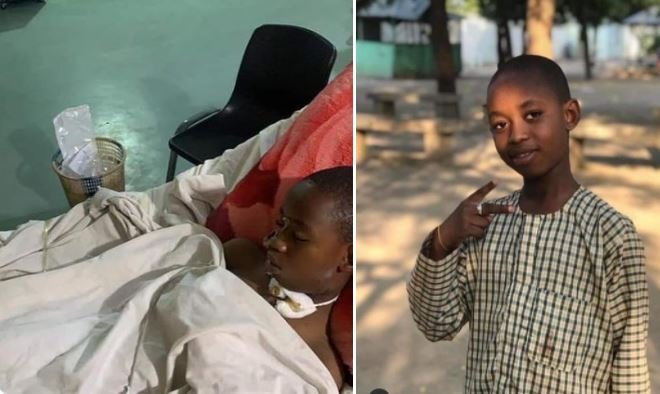 There is wild anger in Borno state and across Nigeria after a secondary school students slit the throat of another student over refusal to run errands.

The uproar the heinous act has generated led the Borno State Government yesterday to constitute a five-man investigative panel to find out the remote causes of the incident and suggest ways to forestall a reoccurrence.

The committee’s members is drawn from the Police, DSS and NSCDC with the Director of Quality Assurance in the Ministry of Education, Hajiya Hadiza Nasir Wali, as the secretary.

The committee is expected to complete its assignment and submit its report to the Commissioner for Education within one week.

Some civil society organisations including the Nigeria Bar Association (NBA) have also vowed to take up the matter and ensure that the victim gets justice and the system is sanitised.

The Vice Chairman of NBA in Borno State, Barrister Yahaya Alhaji Dunoma, said his committee would be meeting with the management of the school to find out the real cause of the incident and see how the NBA could intervene to bring justice to the victim.

Mato, an 11 year-old JSS 1 pupil in the school also known as Ramadan, was said to have been attacked by the senior student for refusing to run an errand for him in the hostel.

According to sources, Ramadan woke up in the wee hours of January 16, had his ablution and observed his early-morning prayer before he went about the day’s activities full of life.

But by nightfall when most students of the college retired to bed, Ramadan almost had his life snuffed out by an SS2 student, Goni a.k.a. Peros.

Peros was said to have sent Ramadan on an errand which the latter refused to go.

Angered by Ramadan’s refusal to carry out his order, Peros allegedly led him to a quiet place that fateful night where he used a razor blade to severely lacerate his neck, injuring most of his arteries and nerves in the process.

He then left his victim in the pool of his blood and fled the scene, following which Ramadan managed to drag himself to the principal’s office where he collapsed.

Ramadan was then rushed to the University of Maiduguri Teaching Hospital (UMTH) where he was admitted to the Intensive Care Unit (ICU) of the hospital.

The victim is said to be a son to a former judge of Federal High Court, Kano State, the late Justice Sadi Mato.

Peros was subsequently arrested and handed over to the police for further investigation.

Paraded by the police in Maiduguri yesterday, Peros said he committed the offence in order to get an excuse to be expelled from the school, saying that he had told his parents several times to remove him from the school but they would not listen to him.

A family source informed that Ramadan, after regaining consciousness, wrote on a piece of paper begging his mother not to allow him return to the school for fear of being killed.

“Mummy, I’m scared. Don’t take me back to that school; he will kill me,” he wrote.

A family source who spoke in confidence alleged that the school authority was trying to cover up the incident but expressed joy at the manner some civil society organisations have acted on the matter.

The source said: “We are happy that the Network for Civil Society Organisation Borno Chapter, Nigeria Bar Association (NBA), the National Human Right Commission (NHRC) And the Federation of International Female Lawyers (FIDA) have vowed to investigate the case to ensure that the perpetrator was brought to book.

“It was also unfortunate to note that the University of Maiduguri Teaching Hospital (UMTH) also joined the Elkenemy College of Islamic Theology in documenting false propaganda over the incident.

“In Jubril’s (Ramadan’s) file, they wrote that the child fell and got injured instead of saying he was attacked by another person.

“For us as a family, we want Justice for the poor child as we are also planning to take him to Egypt for proper medical attention.”

PRNigeria also quoted some sources in the college as saying that there had been similar cases in the past but were concealed by the school management without any decisive action.

A source said: “This is not the first case of violent attacks in the college. There are several other cases relating to sexual abuse and armed violence reported in the college. But the school management always sweeps them under the carpet. Incidents like this affect the physical and mental states of children.”