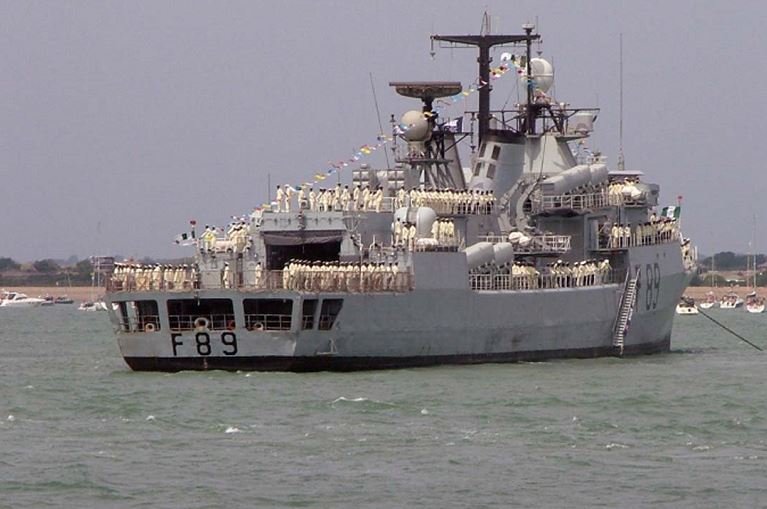 The Senate has called on the presidency to, as a matter of urgency, takeover and resuscitate the largest ship in the fleet of the Nigerian Navy, NNS ARADU.

This was just as it called for a roundtable of stakeholders such as the Nigerian Ports Authority (NPA), Nigerian Maritime Administration and Safety (NIMASA), Nigerian National Petroleum Corporation (NNPC), Nigerian Customs and Excise, and Nigerian Immigration Services to fashion out a funding regime to facilitate the refitting and refurbishing of the Navy flagship in servicing Nigeria’s maritime domain.

These formed resolutions reached sequel to a motion considered during plenary on Wednesday.

The motion was sponsored by Senator George Thompson Sekibo (Rivers East), and co-sponsored by 14 other lawmakers.

Sekibo, in his presentation, said that the Nigerian Navy flagship, NNS ARADU, is one of the first of the MEKO 360 general purpose frigates built by one of the biggest shipbuilders in Germany and commissioned on February 22, 1982.

According to him, NNS ARADU is the largest ship in the Nigerian Navy fleet with a length of 125.6-metres (412 ft l inch) and as a general-purpose frigate.

He added that the capabilities of the Frigate ensured the Nigerian Navy continued to reach out to blue waters with the appropriate ships in terms of firepower, extended operational range and enhanced surveillance capability.

“She played a prominent part in ‘Operation Seadog’ in 1985 and Operation Odion in 1987.

“She has also undertaken extensive diplomatic visits to countries like Gabon, Congo, Zaire, Equatorial Guinea and many European countries;

“Aware that she participated in joint exercises with visiting ships of the German, Indian, French and the Brazilian navies”, Sekibo said.

He recalled that in 1987, barely five years after her commissioning, NNS ARADU ran aground twice and was involved in a major collision and underwent a significant local refit in 1991 at the Nigerian Navy Dockyard, Wilmot Point, Lagos.

Sekibo recalled that in 1997, She sailed to Monrovia, Liberia where she participated in ECOMOG Operation for over six months and steamed back to Lagos with her engines despite losing one generator.

He stated further that NNS ARADU participated in the 200th anniversary celebrations of the Battle of Trafalgar in the UK in 2005 and embarked on the hazardous trans-Atlantic voyage in 2007 to participate in Brazil Bicentenary celebration.

The lawmaker lamented that in 1994, NNS ARADU experienced degradation of machinery and equipment post refit trials and was assessed as Beyond Economical Repair in 1995.

According to him, the flagship while berthed in Naval Dockyard, experienced rough weather and severe turbulence between May 31 to June 2, 2014, which caused the already weakened ship serious damage that resulted in flooding and near sinking.

He noted that the other seven ships of same category in the world built about the same time are still energetically sea worthy and in Operation due to proper maintenance.

“The misfortune of ARADU was the transfer of the ship from the Presidency to the Nigerian Navy for maintenance which could not afford to keep it afloat properly due to the envelope budget system”, Sekibo said.

He observed that NNS ARADU is the equivalent of Air Force One in the Presidential air fleets which has since been maintained and kept by the Presidency.

The lawmaker expressed concern that Nigeria has no flagship on her seas today and had lost her pride of her dreaded sea power among the African nations.

He noted that NNS ARADU can be refitted either locally or internationally or both to give her 25 years extended life span or more.

He expressed optimism on Nigeria’s ability to refit the ailing ship to take her place in the comity of naval formations in Africa and the world.