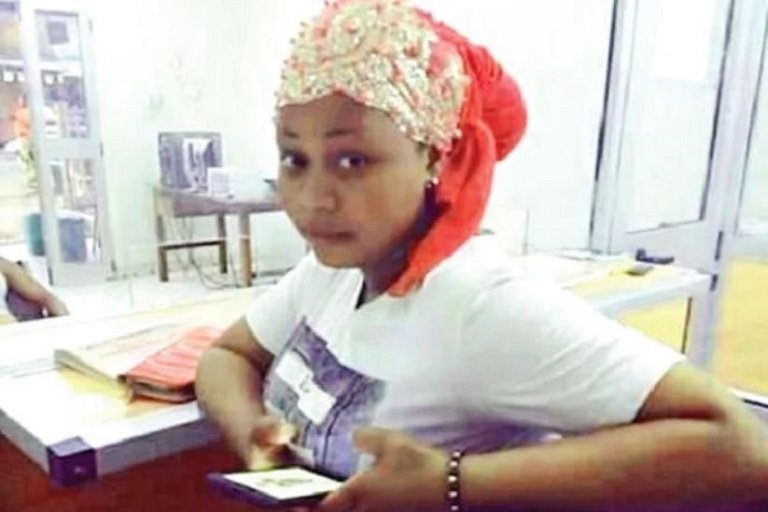 Mr Emmanuel Babalola, father of late Itunnu Babalola also known as Bekky Paul, who was wrongfully jailed and died in Cote d’Ivoire prison, has formally rejected the autopsy report carried out on the body of his 24-year-old daughter.

The apparently worried father made his opinion known when he paid a thank- you visit on the chairman/CEO of Nigerians in Diaspora Commission (NIDCOM), Hon. Abike Dabiri-Erewa in her Lagos office.

He said the autopsy report which was written in French did not reflect the true situation of the cause of death of Itunnu.

Babalola, who wept uncontrollably, said he got somebody who interpreted some aspects of it to him, and expressed dissatisfaction with the result of the post mortem test.

“My daughter (Itunnu) was framed up and was wrongfully jailed. It is painful that they lied against her after breaking into her apartment and stole her property. But it is even disheartening that she died mysteriously in prison after the intervention of your Commission when she was about to be freed.

“I don’t believe that she died of natural cause. I spoke with her on Wednesday in good health condition, how come she died two days later vomiting blood and claiming it was ” sepsis complicated by acute respiratory distress”. This is unacceptable.

“That is why am here to thank you for all you have done for me on her and through you appealing for justice for my late daughter.

Babalola reiterated his call on the Federal Government to ensure that his daughter’s name was cleared of the allegation and make sure that those who framed her up as well as those responsible for her death were brought to justice.

He stressed that while in prison, his daughter complained of poor treatment while in the custody of the Ivorian Government. She was poorly looked after and suffered from health complications. Her health deteriorated so bad that she had to be admitted to military hospital. She unfortunately died under mysterious circumstances, days after she was admitted to the hospital.

She told me how they took her to hinterland prison from the Cote d’Ivoire Capital Abidjan, a journey of about five hours, and imprisoned her there in order to discourage those championing the case as well as frustrating the cause of justice.

Responding, Hon. Abike Dabiri-Erewa condoled with the Babalola family again and assured the father that the matter would not be allowed to go away like that.

At the solemn occasion, the NIDCOM boss who confirmed that the autopsy said Itunu died of “sepsis complicated by acute respiratory distress” said the autopsy indeed left a lot of doubts because there are gaps in the medical report which calls for more investigation.

The NIDCOM chairman also insisted that the Ivorian policeman and the DPO implicated in the Itunnu’s frame up have questions to answer.

Dabiri-Erewa said that some group of lawyers have indicated their willingness to take the matter up with the ECOWAS court to seek justice for Itunnu.

On behalf of the Commission, she provided some financial support for the family to cushion the effects of losing a breadwinner.

Itunnu died on November 14 at Ivorian military hospital and was buried on Dec. 4 at Sango cemetery in Ibadan, Oyo state aged 24.

She had been wrongly and unjustly convicted of human trafficking, sentenced to 20 years imprisonment, which was later reduced to 10 years.

Itunnu had served two out of the 10 years sentence before the father raised an alarm on behalf of his daughter .

The Nigerian High Commission in Côte d’Ivoire immediately employed the services of a lawyer to appeal the judgment, got the case transferred to Abidjan and the lawyer was on the last lap of finalising the appeal before her sudden death in prison.