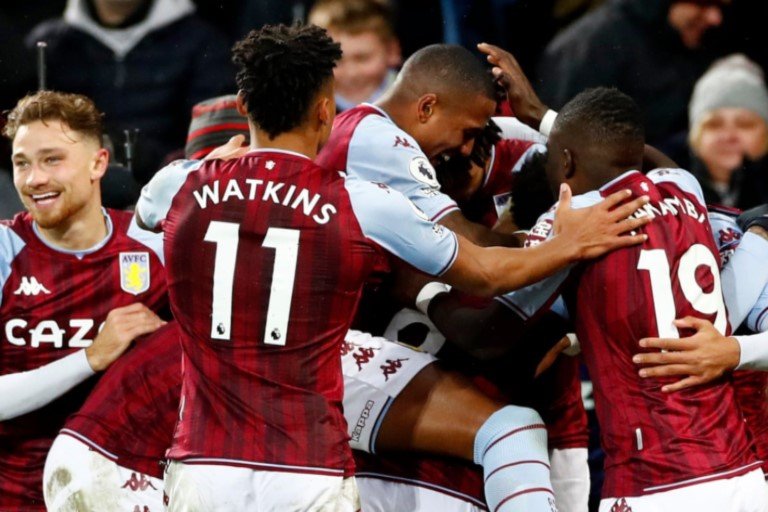 Steven Gerrard said he had to tell his Aston Villa players a “few home truths” at half-time as they came from behind to beat Leicester and continue his fine start to life as a Premier League manager.

Having suffered defeat for the first time in Gerrard’s embryonic reign at home to Manchester City in midweek, Villa again fell behind to Harvey Barnes’ opener for the Foxes.

“I’m really pleased with the result but we still need to iron out some issues,” Gerrard, who will make an emotional return to old club Liverpool managing his new side on Saturday, told BBC Match of the Day.

“There’s loads of work still to do. It took a few home truths at half-time to sort our issues out, to rejig our shape and a few other things.

“All you can ask of your players is to perform, we did that. I thought we were outstanding in the second half. But can we do it for a full 90 minutes without me having to get on the players’ back at half-time?”

Aston Villa 2-1 Leicester City: We were outstanding in the second half – Steven Gerrard
Leicester boss Brendan Rodgers dropped Jamie Vardy to hand Patson Daka a first Premier League start and the Zambia striker set up Barnes to coolly slot through Konsa’s legs and past Emi Martinez.

Villa thought they were ahead on the stroke of half-time as Kasper Schmeichel parried another Cash knockdown and Jacob Ramsey fired home but the keeper had one hand on the grounded ball and Michael Oliver correctly ruled the goal out after a check from the video assistant referee.

In the end, it mattered little as Konsa punished Leicester’s ongoing set-piece shortcomings by nodding home John McGinn’s corner to push Villa above the Foxes into 10th place.

Villa should have won by more as Ollie Watkins and Ramsey wasted glorious chances on the break although the hosts needed a fantastic fingertip save from Martinez to thwart a Barnes header and seal the points.

Gerrard gets one over on his former boss

Rodgers was the manager who famously almost led Liverpool to an elusive top-flight title during Gerrard’s playing career – and the student now has two wins out of three over the teacher after swapping Old Firm victories in the sole season their managerial stints at Celtic and Rangers overlapped.

That scenario looked unlikely early on at Villa Park, with the hosts frequently over-run by a frenetic Foxes start that was deservedly rewarded by Barnes’ excellently-taken opener.

But after Villa got back on terms, the game became an end-to-end affair that they ultimately gained control of as proceedings wore on.

Leicester still had their moments as Kiernan Dewsbury-Hall headed a great chance wide and James Maddison saw a goal-bound shot blocked by the all-action Cash, who was himself foiled by Schmeichel’s legs at the other end.

However, the Foxes’ failings from set-plays – with 10 league goals conceded from such situations this term – again cost them as Konsa nodded in almost unchallenged.

Villa had been fuming at half-time after Ramsey’s effort was disallowed but Oliver’s decision was correct as the laws of the game state the goalkeeper is deemed to be in possession if the ball is between his hands and the surface.

They quickly put the disappointment behind them and were on top for the majority of the second half, with only Barnes’ late header and a Maddison effort that curled inches wide providing any alarms.

Leicester, meanwhile, have won just three of their past 12 in the league and must fix the defensive woes that have seen them fail to keep a clean sheet since the opening day.

Foxes boss Rodgers admitted: “Our Achilles heel which has killed us is our defending of the set-piece. The situation can sap the confidence out of the team.

“The only threat against us in the first half was when the ball went dead. In the second half, the corner we conceded from was hugely disappointing. It’s an area we spoke about before the game.

“We don’t get tight enough on the marking and he’s able to squeeze it in the far post. These are undoing some really good parts of our game. It’s something we’ve got to fix.”