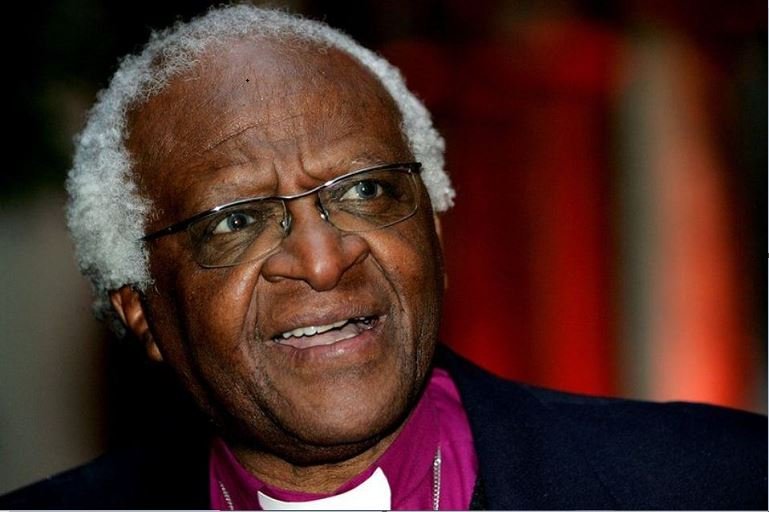 His death was confirmed in a statement by President Cyril Ramaphosa.

It marked “another chapter of bereavement in our nation’s farewell to a generation of outstanding South Africans who have bequeathed us a liberated South Africa,” he said.

Desmond Tutu was one of the country’s best known figures at home and abroad.

Tutu was born of mixed Xhosa and Motswana heritage to a poor family in Klerksdorp, South Africa.

Entering adulthood, he trained as a teacher and married Nomalizo Leah Tutu, with whom he had several children. In 1960, he was ordained as an Anglican priest and in 1962 moved to the United Kingdom to study theology at King’s College London.

In 1966 he returned to southern Africa, teaching at the Federal Theological Seminary and then the University of Botswana, Lesotho and Swaziland.

In 1972, Desmond Tutu became the Theological Education Fund’s director for Africa, a position based in London but necessitating regular tours of the African continent.

Back in southern Africa in 1975, he served first as dean of St Mary’s Cathedral in Johannesburg and then as Bishop of Lesotho; from 1978 to 1985 he was general-secretary of the South African Council of Churches.

He emerged as one of the most prominent opponents of South Africa’s apartheid system of racial segregation and white minority rule. Although warning the National Party government that anger at apartheid would lead to racial violence, as an activist he stressed non-violent protest and foreign economic pressure to bring about universal suffrage.

In 1985, Desmond Tutu became Bishop of Johannesburg and in 1986 the Archbishop of Cape Town, the most senior position in southern Africa’s Anglican hierarchy.

In this position he emphasised a consensus-building model of leadership and oversaw the introduction of female priests. Also in 1986, he became president of the All Africa Conference of Churches, resulting in further tours of the continent.

After President F. W. de Klerk released the anti-apartheid activist Nelson Mandela from prison in 1990 and the pair led negotiations to end apartheid and introduce multi-racial democracy, Tutu assisted as a mediator between rival black factions.

After the 1994 general election resulted in a coalition government headed by Mandela, the latter selected Desmond Tutu to chair the Truth and Reconciliation Commission to investigate past human rights abuses committed by both pro and anti-apartheid groups.

Since apartheid’s fall, Desmond Tutu has campaigned for gay rights and spoken out on a wide range of subjects, among them the Israeli–Palestinian conflict, his opposition to the Iraq War, and his criticism of South African presidents Thabo Mbeki and Jacob Zuma. In 2010, he retired from public life.

Desmond Tutu polarised opinion as he rose to notability in the 1970s. White conservatives who supported apartheid despised him, while many white liberals regarded him as too radical; many black radicals accused him of being too moderate and focused on cultivating white goodwill, while Marxist–Leninists criticised his anti-communist stance.

He was widely popular among South Africa’s black majority, and was internationally praised for his anti-apartheid activism, receiving a range of awards, including the Nobel Peace Prize. Desmond Tutu has also compiled several books of his speeches and sermons.

Avuru responds to Seplat, says “my purported sack is mischievous”