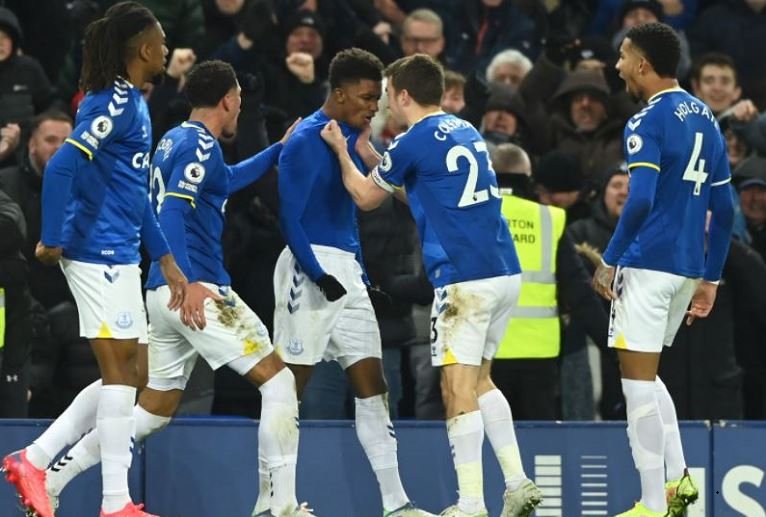 Demarai Gray’s sublime injury time goal to helped Everton end eight games without a win as they beat Arsenal 2-1 to complete their comeback at Goodison Park.

The Gunners took the lead towards the end of the first half through midfielder Martin Odegaard.

The Toffees scored twice through Brazilian forward, Richarlison but both chances were ruled out for offside.

Richarlison eventually got his goal after Gray hit the woodwork to draw the game level.

The scenes at the final whistle were a complete turnaround from last Wednesday, when the mood turned ugly after a 4-1 defeat by their city rivals.

Victory lifts Everton to 12th in the table, eight points above the relegation zone.

Few fans can have expected such a performance after recent showings – had Everton failed to win this would have been their worst run of form since 1994.

Instead it was reminiscent of the club’s early season form when they chalked up successive comeback wins at home and climbed to fourth.

And it was the perfect response to dozens of fans who left their seats after 27 minutes in protest about how the club is being run, with the timing a reference to the club’s 27-year wait for a trophy.

The result also vindicated Benitez’s insistence that the club would return to winning ways once injured players returned, even if Lucas Digne was left out as Yerry Mina returned to the side.

In keeping with their success earlier in the season, it was Gray who was Everton’s most dangerous player, but he was aided by Richarlison, who showed great perseverance to score at the third time of asking.

His header in a poor first half, moments before Odegaard scored for Arsenal, was clearly offside but the frustration for the Brazilian and the 35,000 Everton fans inside a raucous Goodison Park was palpable when a second goal was ruled out because his toe was inches beyond the Arsenal defensive line.

When his headed goal eventually came after Gray hit the bar, it changed the mood among a set of fans who have been angered by a familiar run of form under majority shareholder Farhad Moshiri, despite the British-Iranian spending close to £500m over the past six years.

But there was further delight to come when Gray found the top corner for his fifth goal of the season.

Having arrived for only £1.7m in the summer, he is proving to be a cut-price talisman.

Mikel Arteta’s return to a club where he spent five years as a player proved a fruitless one.

Having made four changes from the loss at Manchester United last Thursday, including the return of Bukayo Saka, Granit Xhaka, Tierney and Alexandre Lacazette up front in place of Pierre-Emerick Aubameyang, he was rewarded with a disciplined performance.

But a third defeat in four games, following an eight-game unbeaten run, will lead to further questions about his side, who were outfought and looked uninspired for large periods of the game.