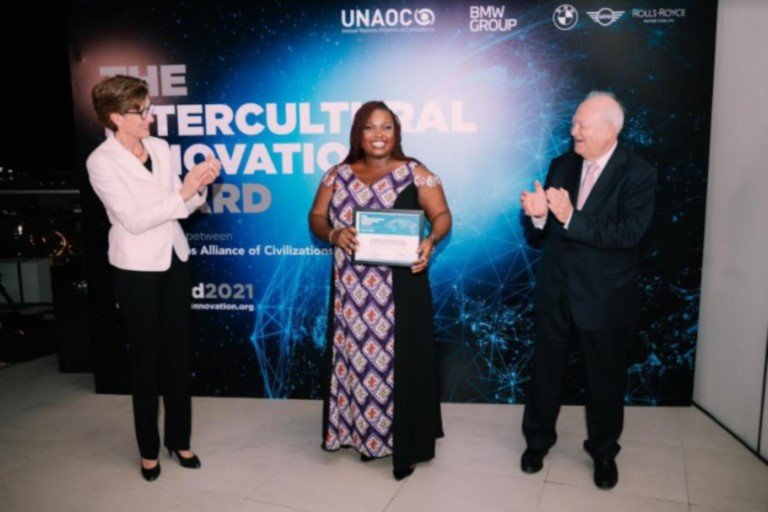 The award was presented to the organization at an elaborate event held at the Dubai EXPO, United Arab Emirates.

The award was presented by His Excellency, Mr. Miguel Angel Moratinos, the High Representative for the United Nations Alliance of Civilizations (UNAOC) and Ms. IIka Horstmeier, a member of the Board of Management of BMW AG responsible for Human Resources Labour Relations Director.

Out of the 1,100 entries from 120 Countries, only 10 organisations were selected, and Street Project Foundation was the only country in Sub-Saharan Africa selected.

In an interview, Mrs. Rita Ezenwa-Okoro, expressed delight for the honour, saying it was a reward for hardwork and assured that the foundation will continue to do its best to facilitate opportunities for youth employment, social mobilization and cross-cultural dialogue using creative arts as a tool.

“Receiving the intercultural and Innovation Award is a validation of the revolutionary work that Street Project Foundation is doing in Nigeria. This is a boost to our cause of using the performing arts as a tool to foster a youth movement that advocates for inclusion, pluralism and global citizenship”, she said.

Mr Ezenwa Okoro, the consultant to Street Project Foundation, also added that “Coming from a country with over 200 ethnic groups and languages, this award is an endorsement of our efforts towards an egalitarian society that works for everyone”.

According to the organizers, the ten award winning organisations will share a financial grant of $200,000 and further support from the United Nations, BMW Group and Accenture.

The Crowther Project goes to schools by Pelu Awofeso