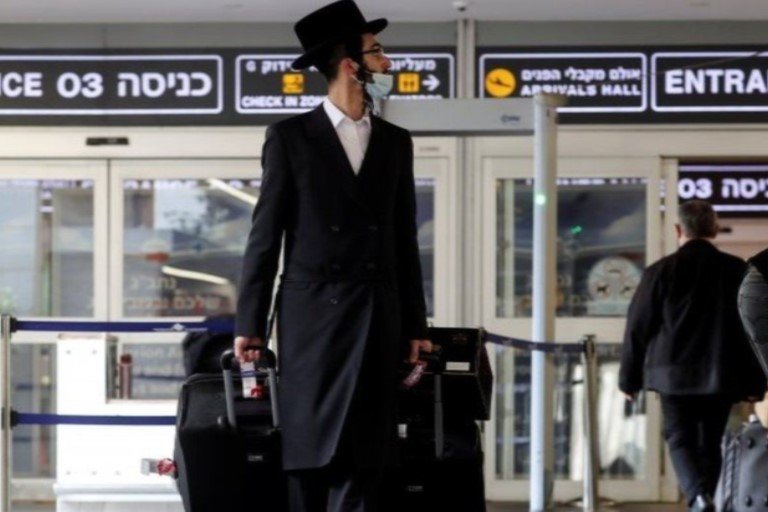 Israel is to ban foreigners from entering the country for 14 days and use surveillance to halt the spread of the new Covid strain, ‘Omicron’ according to a local media report.

The ban is expected to come into effect at midnight on Sunday, following full cabinet approval.

Israel has so far confirmed one case of the potentially more infectious Omicron strain first detected in South Africa.

Many countries have since banned travel to South Africa and its neighbours.

South Africa has complained that it is being punished – instead of applauded – for discovering Omicron earlier this month.

The World Health Organization (WHO) has warned the new variant is “of concern”, with early evidence suggesting a higher re-infection risk.

However, the WHO has warned against countries hastily imposing travel restrictions, saying they should look to a “risk-based and scientific approach”.

The Israeli coronavirus cabinet agreed on a series of new restrictions at a crisis meeting late on Saturday and are subject to final approval by the larger cabinet.

In addition to the entry ban for non-Israelis, a three-day mandatory quarantine would be required for all vaccinated Israeli nationals, and a seven-day quarantine for those who have not been vaccinated.

Earlier on Saturday, the Israeli authorities had put 50 African nations on the so-called “red” list.

All Israeli nationals returning from those countries must quarantine in the government-approved hotels and undergo Covid tests.

A ban on foreigners entering Israel from most African countries was imposed on Friday.

Israel has confirmed more than 1.3 million Covid infections since the start of the pandemic, with over 8,100 deaths, according to America’s Johns Hopkins University.

On Friday and Saturday, a number of countries around the world announced new measures to halt the spread of the new variant:

Travellers from South Africa, Namibia, Zimbabwe, Botswana, Angola, Mozambique, Malawi, Zambia, Lesotho and Eswatini will not be able to enter the UK unless they are UK or Irish nationals, or UK residents.

US officials said foreigners would be blocked from travelling from South Africa, Botswana, Zimbabwe, Namibia, Lesotho, Eswatini, Mozambique and Malawi, mirroring earlier moves taken by the EU. They will come into effect on Monday.

Australia announced on Saturday that flights from South Africa, Namibia, Zimbabwe, Botswana, Lesotho, Eswatini, Seychelles, Malawi, and Mozambique would be suspended for 14 days. Non-Australians who have been in those countries in the past two weeks are now banned from entering Australia.

Japan has announced that from Saturday, travellers from much of southern Africa will need to quarantine for 10 days and take a total of four tests during that time.

Canada is barring all foreign nationals who have travelled through South Africa, Namibia, Zimbabwe, Botswana, Lesotho, Eswatini or Mozambique in the last 14 days.

The WHO said the number of cases of this variant initially named B.1.1.529, appeared to be increasing in almost all of South Africa’s provinces.

“This variant has a large number of mutations, some of which are concerning,” the UN public health body said in a statement on Friday.

It said, “the first known confirmed B.1.1.529 infection was from a specimen collected on 9 November”.

The WHO said it would take a few weeks to understand the impact of the new variant, as scientists worked to determine how transmissible it was.

The head of the South African Medical Association told the BBC that the cases found so far in South Africa – where only about 24% of the population is fully vaccinated – were not severe, but said investigations into the variant were still at a very early stage.