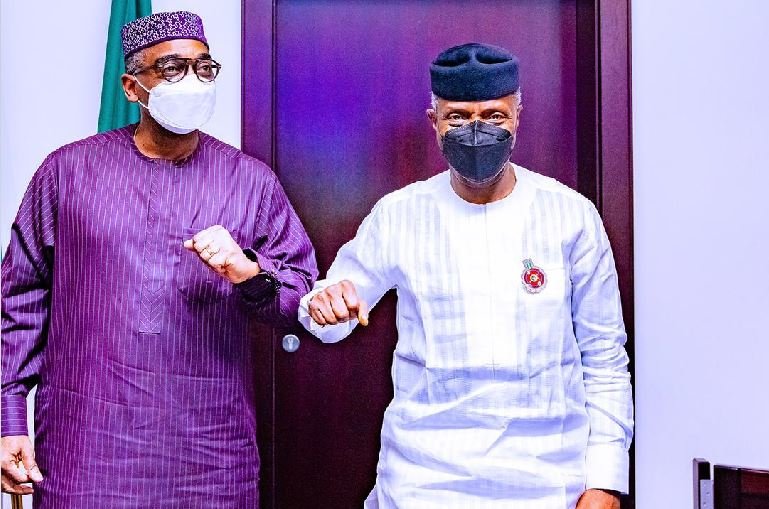 Prof. Osinbajo, stated this today during a courtesy visit to the Presidential Villa by a delegation from the NEPC led by its outgoing Executive Director/CEO, Mr Segun Awolowo.

“In the next few years, those of us who are policymakers and looking at the future, must, today, have a plan. In fact, we have set ourselves on an inevitable course of a zero-oil plan.”

The VP then commended the outgoing NEPC CEO for his foresight, stating that “I really want to commend you for your foresight for putting in place a plan that is very well-structured and detailed.”

Said the VP, “it is very important to note that we are certainly getting away from the oil and gas era. In the past, we used to think that it will still take a while but today, with the circumstances and all of the various factors around the world (less dependence on oil, Climate Change, and COP), it is inevitable.”

He added that “public investments from the EU, from the multilateral organizations for oil and gas, are fizzling out.”

Speaking on the efforts put in place by the NEPC to ensure that the objectives of government were realized, the VP noted that “the Export Expansion Facility Programme (EEFP) is a natural progression for the Zero-Oil Plan.”

Prof. Osinbajo however tasked stakeholders in the sector to brace up for the challenges ahead, stating that “the years to come will test our resolve even more because we are going to be challenging ourselves the more.”

Earlier in his remarks, Mr Awolowo gave an overview of the EEFP which he said has been crucial to the economic diversification agenda of government, disclosing significant increase in non-oil revenues at over one trillion naira which is now 15% above target.

Mr Awolowo praised the support the Council enjoyed from the President and the Vice President in the discharge of its mandates and noted that it enabled the “NEPC to significantly re-energize the country’s non-oil exports.”

According to him, “for instance, the Export Development Fund of the NEPC has been activated for the first time under the Buhari administration through the Economic Sustainability Plan.”

He said that through the activities promoted by the Council, Nigeria is on track in growing its non-oil sector, and urged all stakeholders not to relent in their efforts.

Mr Awolowo who is completing his tenure as NEPC’s ED/CEO was accompanied on the visit by the management and some staff of the Council.

Three ‘Akala Boys’ remanded for dealing in 803kg of marijuana