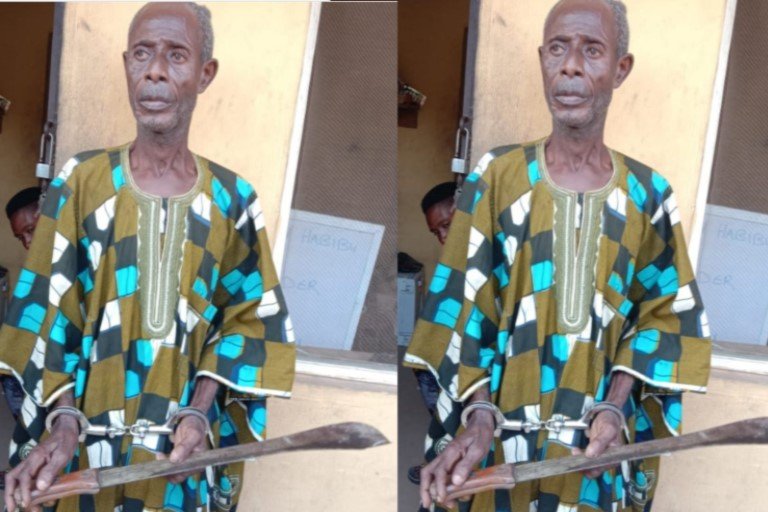 Moshood Habibu, 78, has been arrested by police in Ogun State for the brutal murder of his elder brother over a land dispute.

Habibu allegedly hacked his 94-year-old brother, Salisu Surakatu, to death with a cutlass, according to Abimbola Oyeyemi, the Police Public Relations Officer in Ogun, in a statement on Saturday.

Oyeyemi, a Deputy Superintendent of Police, stated that the suspect committed the crime on Wednesday in Mowe, in the state’s Obafemi Owode Local Government Area.

“The suspect was arrested following a report lodged at Mowe Divisional Headquarters by one Aminu Tajudeen, who reported that the deceased, Salisu Surakatu, was his biological father and that the suspect came to the deceased’s house at Kara Ewumi village (in) Mowe, where he macheted him to death over a disagreement on a land matter,” he said.

“Upon the report, the DPO Mowe Division, CSP Saminu Akintunde, quickly mobilised his detectives to the scene where the suspect was promptly arrested.

“On interrogation, the suspect claimed that the deceased sold a plot from their family land and didn’t give him his own share of the proceeds and that he went there that morning to demand his own share, which led to a hot argument between them.”

According to the state police spokeswoman, the preliminary investigation revealed that the suspect went to the deceased’s house armed with a cutlass.

When he (Habibu) arrived, the deceased, who was blind, had no idea his brother had arrived with a cutlass, he narrated.

Habibu reportedly pounced fiercely on Surakatu and hacked him to death when he was requesting his brother to leave his residence.

“The Commissioner of Police, CP Lanre Bankole, has ordered the immediate transfer of the suspect to the homicide section of the State Criminal Investigation and Intelligence Department for further investigation and diligent prosecution,” Oyeyemi stated.