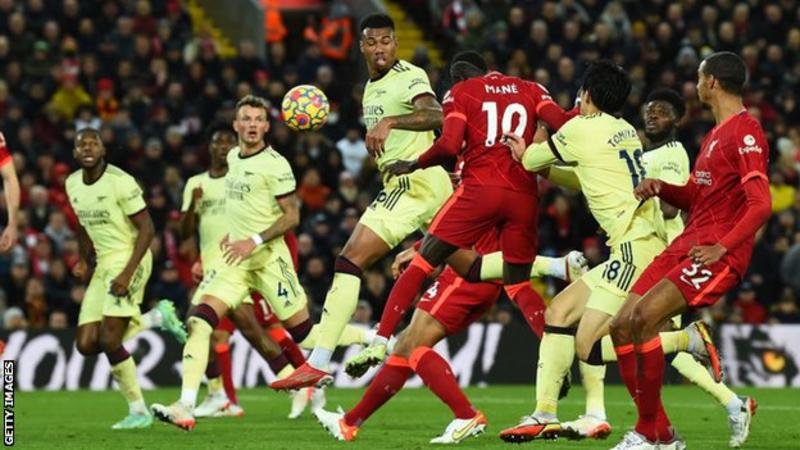 Liverpool ended Arsenal’s 10-game unbeaten run in all competitions with a devastatingly routine victory at Anfield.

Sadio Mane grabbed the opener when he headed in Trent Alexander-Arnold’s free-kick in the first half.

Diogo Jota took advantage of a Nuno Tavares mistake to roll into an empty net before Mohamed Salah slotted home a Mane cross for the third.

Right-back Alexander-Arnold was the provider again when he teed up Japanese substitute Takumi Minamino to make it 4-0 with his first touch, just 48 seconds after coming on.

Victory for Liverpool sees them jump up to second in the Premier League, while Arsenal remain in fifth.

It was a tame affair between the two long-standing rivals for most of the game but Liverpool showed their quality with a ruthless second-half display.

Jurgen Klopp’s side controlled possession before the break and had the best chances – Salah, Alexander-Arnold and Thiago were all denied by Arsenal goalkeeper Aaron Ramsdale.

Ramsdale was kept busy throughout and reacted well to stop Mane scrambling it in off the floor and made a decent save to prevent a second goal from Jota later on.

Arsenal’s Pierre-Emerick Aubameyang and Bukayo Saka were a threat on the counter-attack but Alisson was comfortable when he was called into action and centre-back pairing Virgil van Dijk and Joel Matip were solid for Liverpool.

Despite the four goals, it was rarely a contest which burst into life, though a touchline scrap between managers Klopp and Mikel Arteta ignited a reaction from the crowd in the first half.

Liverpool went into the match knowing victory would see them move up to second place after West Ham were beaten at Wolves.

Arsenal, who have been in good form and were just two points behind Liverpool prior to kick-off, were limited to few chances at Anfield.

On the occasions when Saka and Aubameyang were able to get in behind Liverpool’s defence, it was often in wide areas and Fabinho provided an impressive shield in midfield to hold off further danger.

The Reds lacked intensity in the first half but got the opener through Mane, making use of the ever-reliable delivery of Alexander-Arnold.

That provided them with a platform in the second half and once Jota made it 2-0, the spaces opened up for Liverpool to exploit Arsenal, who had no choice but to push players forward.

Recent battles between the two have proven more dramatic but this was as comfortable as Liverpool could have hoped for and reaffirmed their title challenge.