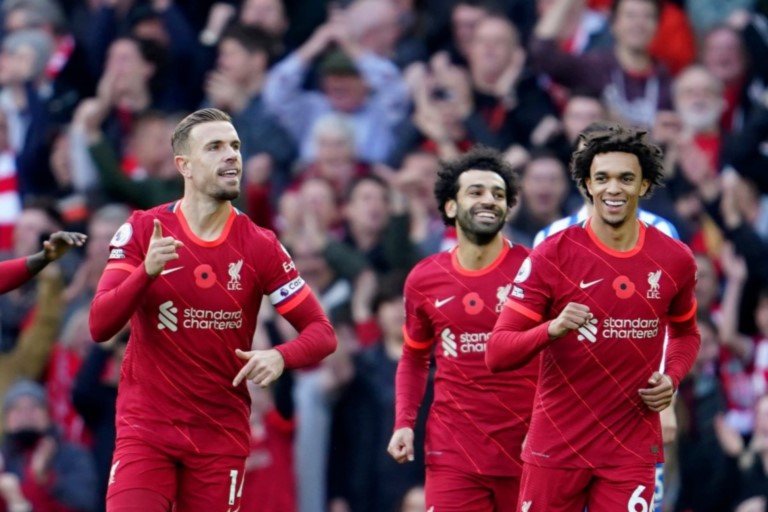 Liverpool swept into the last 16 of the Champions League with a comfortable win over 10-man Atletico Madrid that ensured they will finish top of Group B.

Early goals by Diogo Jota and Sadio Mane, both created by Trent Alexander-Arnold, put the Reds in full command and there was no way back for the Spanish side once Felipe was sent off before half-time.

Jurgen Klopp’s side should have dished out more punishment after the break but missed a flurry of chances and Jota had another strike ruled out for offside by the video assistant referee.

Atletico thought they had pulled a goal back from a deflected shot by former Reds striker Luis Suarez, but that too was chalked off for offside by VAR and they never seriously threatened a comeback.

As well as sending Liverpool through to the knockout stage with two games to spare, the win extends the Reds’ unbeaten start to the season to 16 games.

In total, they have not tasted defeat for 25 matches, dating back to 6 April when they lost to Real Madrid in the quarter-finals of last season’s Champions League.

Recent meetings between these two sides have been somewhat spiky, reflected by the mood inside Anfield right from the start, and this game did not lack controversy either.

With their fans providing a raucous backdrop, Liverpool took around 10 minutes to find their feet but then tore into Atletico and began creating chances.

Alexander-Arnold put the first goal on a plate for Jota with a delicious whipped delivery and although it was unclear whether he meant a shot or a cross for his side’s second, the end result was the same thanks to Mane’s alertness at the near post.

Those two goals proved enough to secure the points, with the game effectively ended as contest when Dutch referee Danny Makkelie decided that Felipe’s swipe at Mane’s heels was enough for a straight red card.

The home crowd did not get the deluge of goals they wanted in the second half but they did get to boo Suarez’s every touch until he was substituted soon after his goal was disallowed.

When Atletico last came to Anfield, in March 2020, the nation was about to go into lockdown because of Covid-19, and Liverpool went out of the Champions League in the last 16 after a 4-3 aggregate defeat.

Almost 20 months on, Coronavirus continues to cast a shadow over football – only 200 Atletico fans made the trip because of fears over the Delta variant – but Liverpool’s current form suggests their latest European adventure is only just beginning.

Looking for what to watch this week? Stay connected on DSTV and GOTV