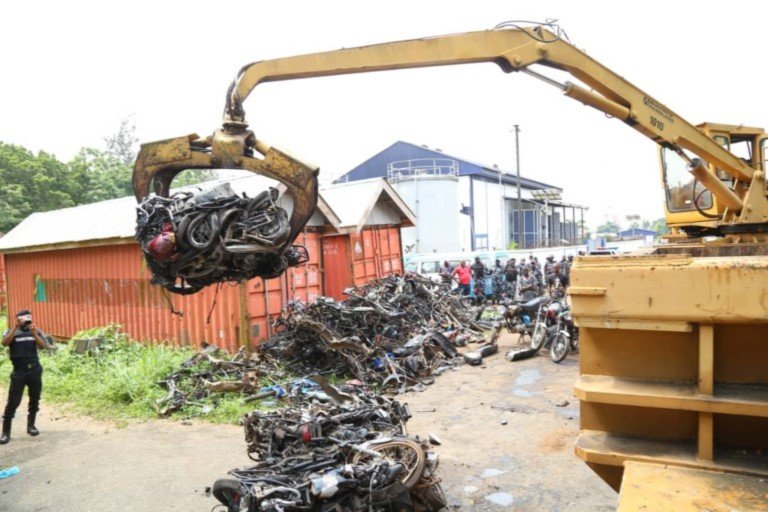 Over 400 motorcycles seized from defaulting riders have been crushed by the Lagos State Police Taskforce.

The exercise which was supervised by the Commissioner of Police, Hakeem Odumosu, said the crushing of the motorcycles will discourage others from violating traffic laws.

Motorcycles, popularly known as Okada, had been banned from some roads in the state.

However, due to lack of proper oversight, the riders have made a habit of flouting the rules which prompted the police to take decisive action.

“Over the years, we’ve observed that the motorcycles we are seeing here now have been part of the instrument they use in committing crime. When somebody is to be kidnapped, they (do it) with Okada, when somebody’s bag is snatched at the bus stop, they do that. With the traffic now, Okadas are being used to commit crime,” Mr Odumosu said.

“And because of this now, the state government, in its wisdom, decided that Okadas should be restricted in some areas of the state.

“We have started this enforcement for a long time, yet they are still in town because Rome was not built in a day. But we will not give them breathing space.

“Some people have insinuated that we sell back the Okadas to those we collect them from, thereby recycling it. That’s why we decided that let the Doubting Thomases know that we don’t sell Okada.

“The law says they should be crushed once they are impounded. And that’s why we decided to demonstrate this.”