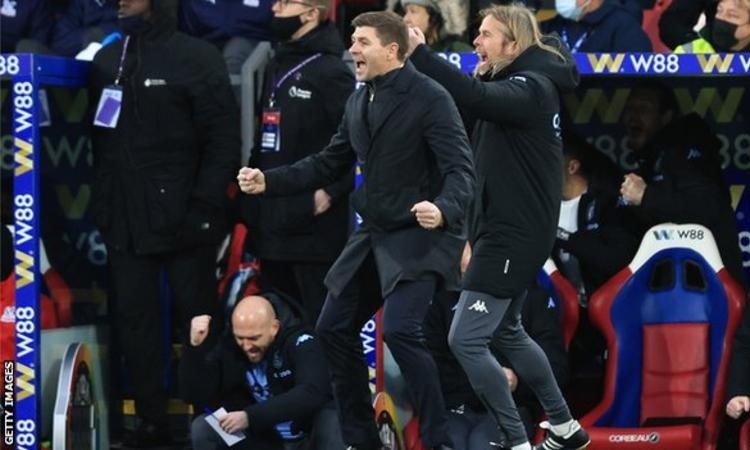 Steven Gerrard secured his second win as Aston Villa manager as his side claimed a 2-1 victory over Patrick Vieira’s Crystal Palace at Selhurst Park.

After wildly celebrating grabbing all three points late on against Brighton a week ago, the former Liverpool captain was again jubilant when Matt Targett put Villa ahead with a low drive through a crowd of bodies from Ashley Young’s corner on 15 minutes.

As Palace tried to salvage something in the closing stages of the second half, John McGinn curled a beautiful shot into the top corner from the edge of the box to double the visitors’ lead against the run of play.

Palace managed to snatch a late consolation through Marc Guehi in injury time but it was not enough to deny Villa.

In bitterly cold conditions in south London the travelling Villa support were treated to a confident performance, with McGinn, Ezri Konsa and Tyrone Mings all having chances to double the visitors’ lead in the first half.

Palace should have opened the scoring through Wilfried Zaha after the forward jinked past his marker on the edge of the Villa box but his left-footed effort was dragged just wide of the far post.

The Eagles saw a great opportunity to equalise after the break denied when referee Michael Salisbury blew his whistle for a foul by Marvelous Nakamba on Zaha and missed the advantage Christian Benteke and Conor Gallagher had created.

Villa almost played out the final quarter of the game with 10 men as substitute Douglas Luiz was shown a red card for a challenge on Cheikhou Kouyate, but it was downgraded to a yellow after Sailsbury had consulted the pitchside monitor.

The win moves Gerrard’s Villa up into 11th place, level on points with Palace in 10th.