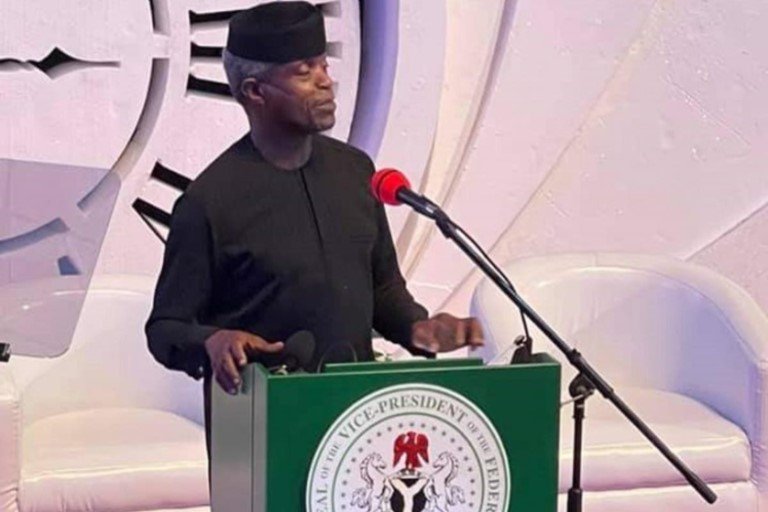 The VP stated this on Friday at the 2021 Presidential Policy Dialogue of the Lagos Chamber of Commerce and Industry (LCCI).

While highlighting the importance of the private sector in driving Nigeria’s economy on the path of sustainable growth and job creation, Prof. Osinbajo noted that “the private sector on which so much depends and so well represented here, will rise up to help Nigeria achieve these noble objectives by working closely with Government.”

He disclosed that the collaboration of both government and the private sector “must promote productivity and value addition and move away from the despair of managing limited resources to producing and creating more in a competitive and sustainable manner.”

Explaining how the collaboration would be implemented, the VP stated that the Plan “envisages an investment commitment of N348trillion over the plan period of which it is expected that Government at all levels will come up with about N49.7trillion or about 14%, while the private sector is expected to invest N298 trillion or about 86%.”

In addition, the Federal Government has continued to take deliberate steps to encourage the private sector in improving the country’s business environment, by enabling more speedy transactions and removing bureaucratic obstacles.

“For instance, the very first Executive Order issued by this Government, EO 001 was on promoting transparency and efficiency in the business environment. Executive Order 003 promoting support for local content in public procurement had a similar objective in mind,” Prof. Osinbajo recalled.

He then stated that when fully implemented, the National Development Plan’s strategy of becoming a value-adding economy will help create many jobs.

According to him “the strategic objectives of the Medium-Term Plan include establishing a strong foundation for a diversified economy, investing in critical infrastructure, enabling human capital development and improving governance and strengthening security. The implementation of the Plan is expected to be supported by a range of measures of fiscal, monetary, and trade measures, including reformation of subsidy regimes and a better functioning foreign exchange market.

“In terms of strategic direction, increasing productivity is the cornerstone. In practical terms, this means focusing on value addition as the guiding principle for all sectors including agriculture, manufacturing, solid minerals, digital services, tourism, hospitality, sports, and entertainment. In agriculture, for example, equal attention is given to primary production as well as other aspects of the value chain such as storage, transportation, processing, marketing, and exports.”

In the same vein, he noted that the private sector “must contribute to the articulation of the National Trade Strategy, provide support to our negotiators in AfCFTA processes while taking full advantage of the opportunities provided by this free trade area.”

He added, “this government has always emphasised that the private sector has a key role to play in our efforts to build a more resilient and competitive economy. Private companies are engaged in design, construction, logistics and financial components of national infrastructural projects just as we are fully conscious that good infrastructure is vital to enable the private sector to be efficient and competitive.

“As things stand, negotiations on the Rules of Origin which are very important for boosting local production are at about 87.65% complete with outstanding work of about 10% on textiles and 2% relating to automobiles. In services, 41 countries have made offers but which are still to be verified. The Phase 2 negotiations on Investment, Intellectual Property, Competition are at early stages while talks on Women and Youth in Trade and Digital Trade are yet to start.”

Prof. Osinbajo stated that the country’s infrastructure will improve further when InfraCo, the N15 trillion infrastructure fund being set up in partnership with the private sector, fully takes off.

Speaking further on the Government’s proactive steps in mitigating the socioeconomic impact of COVID-19, the Vice President noted the far-reaching impact of the Economic Sustainability Plan (ESP) which helped Nigeria exit recession faster than most countries at the height of the global pandemic.

He also stated how the ESP helped in saving and creating jobs, with millions of Nigerians as beneficiaries of ESP components such as the MSMEs Survival Fund.

“The ESP also included a suite of macroeconomic policies including fiscal grants, tax breaks, regulatory forbearance to banks as well as reduced interest and moratorium on CBN intervention facilities amongst other things.

“These interventions paid off as we had a very short recession and we are now seeing a rebound in economic activity with GDP growth of 5.01% in the second quarter of this year and 4.03% in the third quarter.”

These include the N-Power scheme (where up to 1.5 million young Nigerians were recruited over two cohorts), and the Jubilee Fellows Programme – in collaboration with the United Nations Development Programme, the European Union, and other partners – a one-year work placement scheme for 20,000 young Nigerians set to kick-off in January 2022.

The Vice President observed that “while this was a scratch on the surface as well over two million young people enter into the workforce every year, there is no doubt that the Nigeria private sector has to thrive in order to create the number and kinds of jobs that we need but it is also important for the Nigerian youth to acquire the skills and knowledge of the workplace.”

This is a major reason why Government is ramping up its efforts to prepare Nigeria’s economy for the future by diversifying the economy, as well as creating a more enabling environment for the digital and creative sectors to thrive, the VP added.

“For instance, the Big Six Technology Companies Facebook, Amazon, Apple, Alphabet, Microsoft and now Tesla, account for up to half of the value of the NASDAQ 100 and had nearly $1trillion in revenues in 2019. By contrast, Nigerian GDP in 2019 was just about $450billion. What this shows is that as a nation, we have to embrace technology and learn to use it for our own developmental purposes.

“This is one of the reasons why the Advisory Group on Technology and Creativity which brings together public and private stakeholders articulated the need to strengthen the ecosystem of support to the digital and creative sectors.

“This resulted in the conceptualization of the $600million investment in Digital and Creative Enterprises programme (i-DICE) with the African Development Bank which we hope will become operational early in 2022,” he noted.

The Vice President added that even as the country adopts measures to cope with the fall-out of the COVID-19 pandemic, it also has “to factor in the need to mitigate and adapt to climate change and the relentless march of the digital economy and the Fourth Industrial Revolution.”