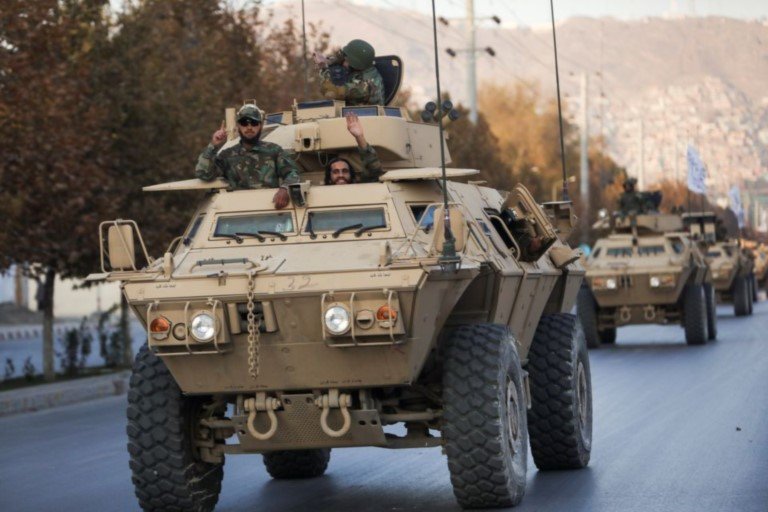 Taliban forces held a military parade in Kabul on Sunday using captured American-made armoured vehicles and Russian helicopters in a display that showed their ongoing transformation from an insurgent force to a regular standing army.

The Taliban operated as insurgent fighters for two decades but have used the large stock of weapons and equipment left behind when the former Western-backed government collapsed in August to overhaul their forces.

Most of the weapons and equipment the Taliban forces are now using are those supplied by Washington to the American-backed government in Kabul in a bid to construct an Afghan national force capable of fighting the Taliban.

Those forces melted away with the fleeing of Afghan President Ashraf Ghani from Afghanistan – leaving the Taliban to take over major military assets.

Taliban officials have said that pilots, mechanics and other specialists from the former Afghan National Army would be integrated into a new force, which has also started wearing conventional military uniforms in place of the traditional Afghan clothing normally worn by their fighters.

According to a report late last year by the Special Inspector General for Afghanistan Reconstruction (Sigar), the U.S. government transferred to the Afghan government more than $28 billion worth of defence articles and services, including weapons, ammunition, vehicles, night-vision devices, aircraft, and surveillance systems, from 2002 to 2017.

Some of the aircraft were flown into neighbouring Central Asian Countries by fleeing Afghan forces, but the Taliban have inherited other aircraft. It remains unclear how many are operational.

As the U.S. troops departed, they destroyed more than 70 aircraft, dozens of armoured vehicles and disabled air defences before flying out of Kabul’s Hamid Karzai International Airport following a chaotic evacuation operation.