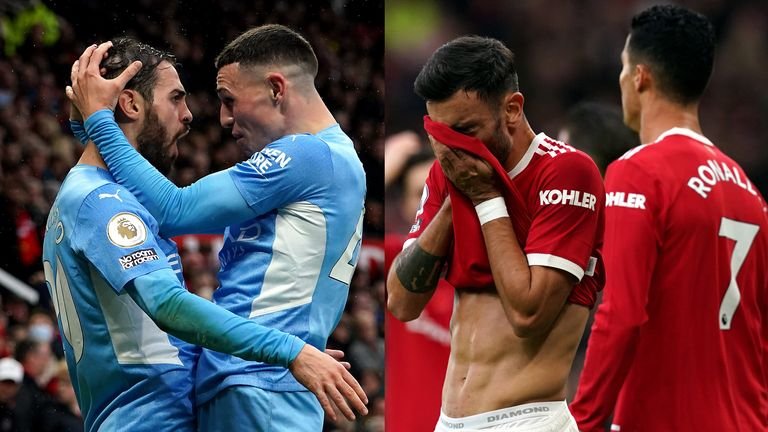 Manchester City put the pressure back on Manchester United’s struggling manager Ole Gunnar Solskjaer as they cruised to victory with almost embarrassing ease at Old Trafford.

City’s win may not have been as emphatic as Liverpool’s magnificent 5-0 victory here in United’s last home league game but the gulf between the sides was certainly as wide.

Solskjaer and United got off to the worst possible start when Eric Bailly turned Joao Cancelo’s cross into his own net after seven minutes and it was only the brilliance of keeper David de Gea that somehow kept City at bay until the final seconds of the first half.

De Gea produced a string of brilliant saves, denying Cancelo twice as well as Gabriel Jesus and Kevin de Bruyne, plus even saving from his own defender Victor Lindelof. However, Bernardo Silva took advantage of awful defending from Harry Maguire and Luke Shaw to steal in on another Cancelo cross at the far post.

United’s only response was a volley from the subdued Cristiano Ronaldo. The second half was merely a formality as City moved down the gears but still looked more likely to score in what was another chastening afternoon for Manchester United and their manager.

Man City in a different class

This was a magnificent performance of class and control from City, who dominated from first whistle to last to illustrate just how superior they are to United.

They had already threatened before Bailly’s own goal and the only question was how they failed to rack up a handful of goals before half-time as they laid siege to keeper De Gea at the Stretford End.

The Spaniard singlehandedly (and occasionally with his feet) kept City out as they cut through United’s defence at will, aided and abetted by some truly awful defending from Maguire, Shaw and Aaron Wan-Bissaka in particular.

It was almost as if De Gea could take no more when he seemed caught by surprise by Silva’s second for City but, understandably, he may have been expecting Maguire and Shaw to deal with that situation before it became fatal.

City had outstanding performers everywhere. Cancelo’s crosses, freed from any defensive pressure, were a deadly weapon and the imperious Rodri ran the show at the heart of the action, winning and giving possession before spraying around the passes that allowed Pep Guardiola’s side to show their quality in the wide positions.

It was the perfect response, in the Premier League context at least, to the shock home loss to Crystal Palace last week and again if Guardiola has a complaint – and this arch-perfectionist is never satisfied – it might be that City did not rub United’s nose in it to the same extent as Liverpool did here two weeks ago.

In the final reckoning, however, this was a powerful show of domination from the Premier League champions on the territory of their derby rivals.

This may not have been quite as bad for United as the crushing defeat against Liverpool but it was another abject example of just how far away they are from being serious Premier League challengers.

United were on the back foot from the first whistle, penned in and carrying all the hallmarks of a lower league club hoping for the best against an elite side in the FA Cup.

It was painful viewing as City strutted around imperiously, dominating possession and gratefully accepting the ball when United presented it back to them, as they did with grim regularity.

Ronaldo had one chance which was saved but it was a rare incursion into City territory and, as against Liverpool, frustration eventually got the better of him and he was shown a yellow card for a foul on De Bruyne in the dying seconds.

All the time, Solskjaer – as he did against Liverpool – looked powerless to alter affairs on his very occasional appearances in his technical area, during which he was taunted mercilessly by City’s fans.

The introduction of Jadon Sancho at half-time had little impact with the tone already set and you almost felt sympathy for the forgotten man Donny van de Beek when he was sent on with 10 minutes left. It was an interesting moment as the Netherlands midfielder received huge applause from the Stretford End as he warmed up and when he came on – although some of this may have been from Fred being put out of his misery.

United head into the international break with only one win in six Premier League games, four points from a possible 18, and more questions over the beleaguered figure of Solskjaer.

Man Utd not on the same level with City – Bruno Fernandes