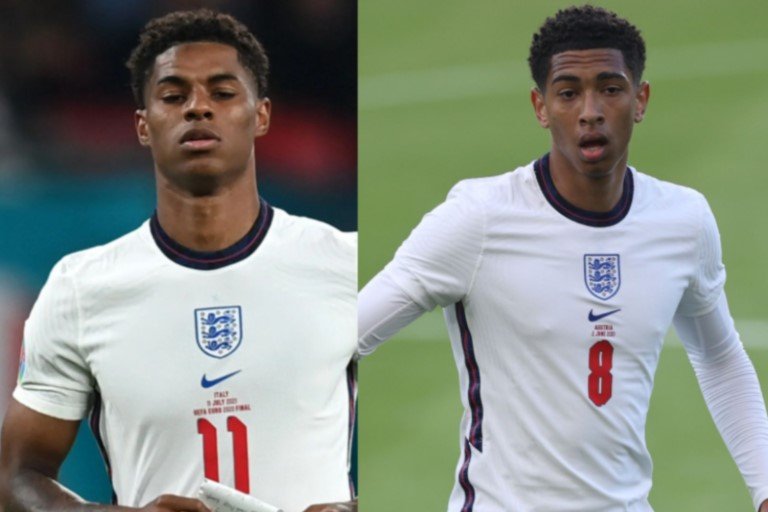 Marcus Rashford and Jude Bellingham have been recalled to the England squad for this month’s World Cup qualifiers with Albania and San Marino.

There is no place in the squad for Rashford’s Manchester United team-mates Jadon Sancho and Jesse Lingard.

England play Albania at Wembley on 12 November before rounding off their qualifying campaign away to San Marino on 15 November.

They require four points from those games to qualify for Qatar 2022.

Liverpool’s Trent Alexander-Arnold, who last played for the Three Lions on 5 September, also returns to the squad.

Forward Rashford has not played for England since the Euro 2020 final defeat by Italy in July.

He returned to club action on 16 October after shoulder surgery and has scored three goals in five appearances.

Lingard and Sancho both made the last squad but both have experienced issues with lack of form and game time.

Borussia Dortmund midfielder Bellingham, 18, was left out of the squad for last month’s qualifiers against Andorra and Hungary.

Jadon Sancho played in England’s World Cup qualifying win away to Andorra on 9 October but has struggled for form at Manchester United.

Gareth Southgate said there was strong competition for places, with England Under-21 squad members Emile Smith Rowe, Conor Gallagher and Marc Guehi pushing for a place in the senior set-up.

Asked about the omissions of Sancho and Lingard, he added both understood they needed to “get back playing and playing well”.

“If you’re playing regularly for your club you have a better chance for us to assess your football,” he added.

Sancho has made three Premier League starts since his high-profile move from Borussia Dortmund in the summer, while Lingard has yet to start a top-flight match since returning from a loan at West Ham.

The England boss said Atletico Madrid’s Trippier had not been selected this time “to give a bit of an opportunity to Reece and to Trent”.

Southgate was speaking for the first time since the Football Association was ordered to stage their next home match in Uefa competition – which will be in the Nations League in June – behind closed doors as punishment for the disorder around the Euro 2020 final at Wembley.

“It is for us as a team of course a blow that we have to play with no fans in the stadium for a game because that’s the advantage of being at home – that’s why home advantage is so important.”