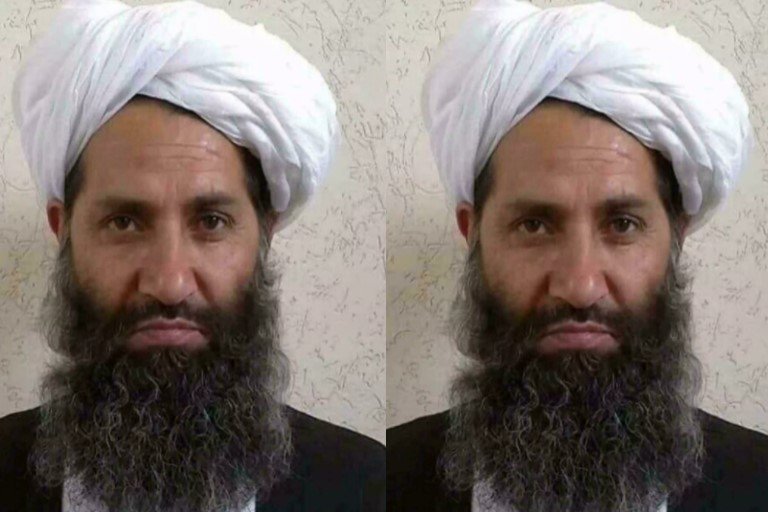 Akhundzada has been the spiritual chief of the Islamist movement since 2016 but has remained a reclusive figure, even after the Taliban seized power in Afghanistan.

His low profile has fed speculation about his role in the new Taliban government, formed after the group took control of Kabul in mid-August — and even rumours of his death.

On Saturday, he visited the Darul Uloom Hakimah madrassa to “speak to his brave soldiers and disciples”, according to the introduction to an audio recording circulated by Taliban social media accounts.

Until now, the Taliban leader had never made a public appearance and his whereabouts were largely unknown.

“May God reward the oppressed people of Afghanistan who fought the infidels and the oppressors for 20 years,” Akhundzada said, in the recording. “My intention here is to pray for you and you pray for me”.

In the 10-minute recording, he prays for the Taliban martyrs, wounded fighters and the success of officials involved in the “big test” of rebuilding what they call the Islamic Emirate of Afghanistan.

“Let’s pray that we come out of this big test successfully. May Allah help us stay strong,” he said.

There was tight security at the event and no photographs or video have emerged.

Akhundzada is referred to as “Amirul Momineen”, commander of the faithful, the rank conferred on the late Taliban founder Mullah Omar by his supporters.

Akhundzada is thought to have been selected to serve more as a spiritual figurehead than a military commander, but his unusually public statements will fuel speculation that he now plans to take a more central role in leading the new government.

Akhundzada rose from low-profile religious figure to leader of the Taliban in a swift transition of power after a 2016 US drone strike killed his predecessor, Mullah Akhtar Mansour.

After being appointed leader, he secured the backing of Al-Qaeda chief Ayman al-Zawahiri, who showered the cleric with praise calling him “the emir of the faithful”.

Akhundzada was tasked with unifying a Taliban movement that briefly fractured during the bitter power struggle after Akhtar’s assassination, and the revelation that the leadership had hidden the death of their founder Mullah Omar for years.

His public profile has largely been limited to the release of messages during Islamic holidays, and Akhundzada is believed to spend most of his time in Kandahar, the main city in the Taliban’s southern Afghan heartland.

His last message was on September 7, when he told the newly appointed Taliban government in Kabul to uphold sharia law as they govern Afghanistan.

Last week, Mullah Yussef Wafa, the Taliban governor of Kandahar and a close ally of Akhundzada, told AFP he was in regular contact with his mysterious chief.

“We have regular meetings with him about the control of the situation in Afghanistan and how to make a good government,” he said in an interview.

“As he is our teacher, and everyone’s teacher, we are trying to learn something from him,” he added.

“He gives advice to every leader of Islamic Emirate of Afghanistan and we are following his rules, advice, and if we have a progressive government in the future it’s because of his advice.”