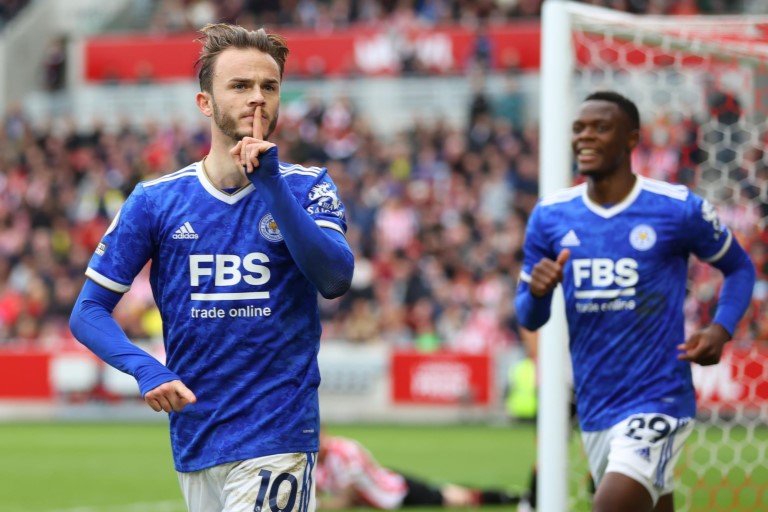 James Maddison claimed his first goal since February as Leicester continued their recent good form with victory at Brentford.

Youri Tielemans had opened the scoring for the visitors early on with a stunning strike, driving an unstoppable first-time effort into the back of the net from outside the box.

Foxes keeper Kasper Schmeichel tipped over an Ivan Toney header just before half-time, but the hosts equalised on the hour when Mathias Jorgensen flicked home a header from a corner.

Brentford then pressed for a winner, but were caught out by a quick Leicester attack in the 73rd minute.

Tielemans played a great ball to send substitute Patson Daka away and he squared for Maddison to fire home.

The victory meant Leicester, who beat Manchester United 4-2 last weekend, moved up to ninth in the Premier League while Brentford are 12th.

After a slow start to the season where they lost three of their first six games, Leicester have got into their stride in the last seven days.

This was their third win in a row in all competitions, with the success against Manchester United followed by a thrilling 4-3 midweek comeback victory against Spartak Moscow in the Europa League.

But, just as pleasing as the results for Leicester will have been in those games, so too key individuals finding their goalscoring form.

Belgian Tielemans now has two in his last two league games, with the superb strike against Brentford reminiscent of his FA Cup-winning strike against Chelsea in May.

Daka, meanwhile, made the headlines with four goals in Europe in midweek and added to that with an assist in this game.

But it will have been particularly pleasing for Foxes fans to see Maddison back on the scoresheet.

The midfielder endured a difficult start to the season and was benched for six games in September and October as he struggled to find his form.

However, he was superb against United and has only gone from strength-to-strength, getting an assist for Daka’s fourth against Spartak and now on the mark against the Bees.

Leicester boss Brendan Rodgers had said earlier this week he believes Maddison has got his swagger back and that certainly appears to be the case.