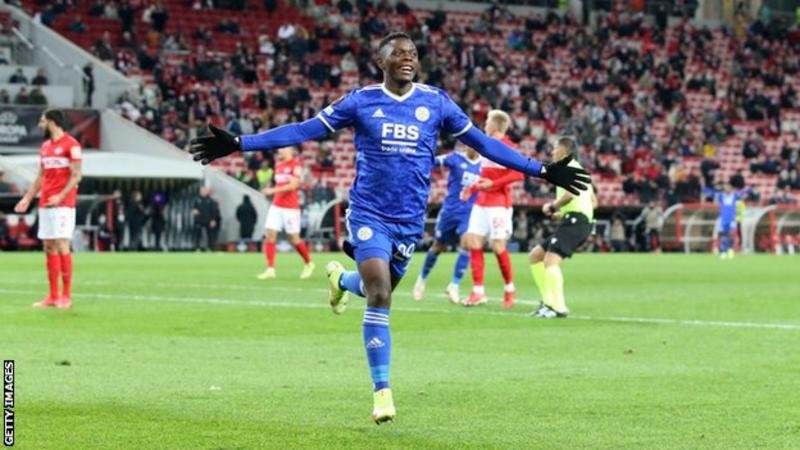 The magnificent Patson Daka scored four goals as Leicester boosted their Europa League qualification hopes by coming back from behind to beat Spartak Moscow.

The Zambia international has had limited opportunities to assert himself in the Foxes first team this season, but demonstrated the clever movement and composure in front of goal that prompted them to part with £22m to sign him from Red Bull Salzburg last summer.

City have struggled throughout this European campaign and had looked to be on course for another damaging defeat in the snowy Russian capital as Spartak took a 2-0 lead.

Alexander Sobolev fired in the first via a deflection before former Chelsea wing-back Victor Moses set up Jordan Larsson – the son of ex-Swedish international forward Henrik – to slot in the second.

Crucially, though, Leicester responded immediately, with Daka slotting in after getting on the end of Kelechi Iheanacho’s chipped through-ball.

The Zambia international, who was a goalscoring late substitute in Saturday’s 4-2 win over Manchester United, levelled matters soon after the break with another neat finish, again set up by Iheanacho.

And before the hour mark it was 3-2 as Daka timed his run to perfection to latch onto Youri Tielemans’ pass before slotting in low.

He was not done yet, though, with James Maddison releasing him to seal the win with another side-foot finish with 10 minutes to go.

There was still time for Spartak to scare City, courtesy of Sobolev’s second goal of the game, but the Foxes were able to hold on for the victory.

It is their first of this season’s competition, leaving them second in Group C on four points, two behind leaders Legia Warsaw, who face Italian side Napoli on Thursday.