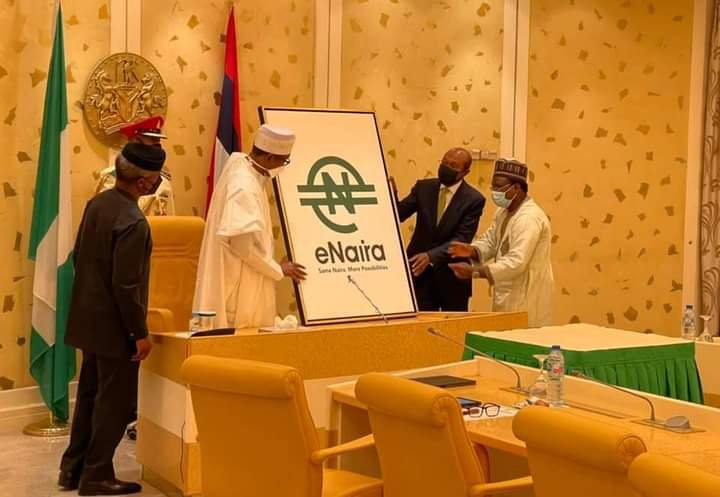 Buhari performed the ceremony at the State House with Vice President Yemi Osinbajo and the Central Bank of Nigeria governor, Godwin Emefiele in attendance.

Also present was the Chief of Staff to the President, Prof Ibrahim Gambari.

The e-Naira had been slated to launch on October 1; However, the CBN suspended the plans, stating that its emergence coincided with plans for Independence Day.

“The launch of the eNaira is a culmination of several years of research work by the Central Bank of Nigeria in advancing the boundaries of payments system in order to make financial transactions easier and seamless for every strata of the society,” CBN’s Director of Corporate Communications, Osita Nwanisobi said.

He added that, “Following series of engagements with relevant stakeholders including the banking community, fintech operators, merchants and indeed, a cross section of Nigerians, the CBN designed the digital currency, which shall be activated on Monday, October 25, 2021.

“The eNaira therefore marks a major step forward in the evolution of money and the CBN is committed to ensuring that the eNaira, like the physical Naira, is accessible by everyone.