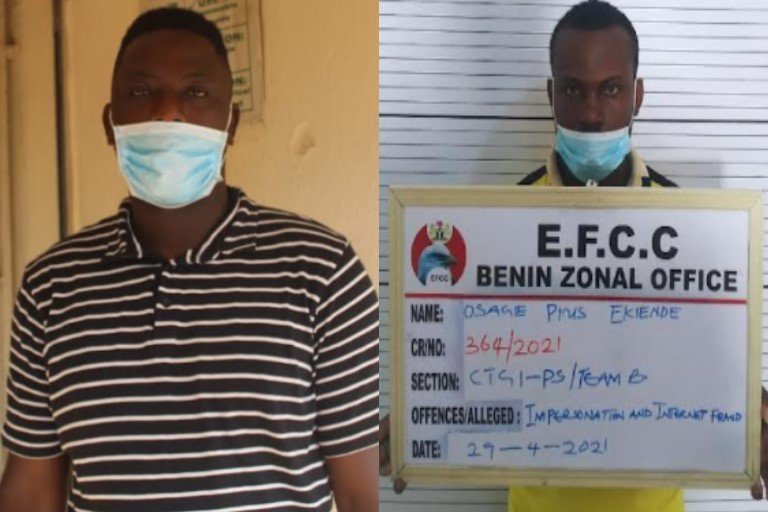 Two internet fraudsters, Igboin Alex and Osagie Pius Ekiende , have been convicted by Justice S. M. Shuaibu of the Federal High Court sitting in Benin City , Edo State on one count charge each for offences bordering on impersonation and obtaining by false pretence. Alex was alleged to have fraudulently obtained the sum of $30,000 USD from one Beth Cabins while Ekiende used a software to gain access to the account of a certain Cherry Pirozziu from Sam Francisco, USA.

The charge against Alex reads: ” that you Igboin Alex sometime in 2014 at Benin City, Edo State within the jurisdiction of this Honourable Court with intent to defraud sent electronic messages which materially misrepresent you identity to one Mrs Beth Cavins upon which she relied and suffered financial loss in the total sum of $30, 000, 00 and thereby committed an offence contrary to section 14 (2) of the Cybercrime (Prohibition Prevention, Etc) Act 2015”.

The charge against Ekiende reads: “that you Osagie Pius Ekiende sometime in 2020 within the jurisdiction of this Honourable Court with intent to defraud used a software in the name of WELLS FARGO to generate access code which you used in gaining access to the account of one Cherry Pirozzou with account no. 5647399277 from San Francisco United States of America, held in the data of Cherry Pirozzou and thereby committed an offence contrary to and punishable under section 28(5) of the Cybercrime (Prohibition Prevention, Etc) Act 2015.”

Upon arraignment, the defendants pleaded guilty to their respective charge .

Justice Shuaibu also ordered that the two iPhones, 1 Apple Laptop, and a Toyota Camry car recovered from the defendants in the course of investigation be forfeited to the Federal Government of Nigeria.

Related Topics:BeninCybercrimeEconomic and Financial Crimes CommissionEdoEFCCFraudJustice S.M Shuaibu
Up Next

Mark Zuckerberg’s impostor, others jailed for internet fraud in Ilorin