Mountain gorilla who posed for selfie dies at 14
Advertisement 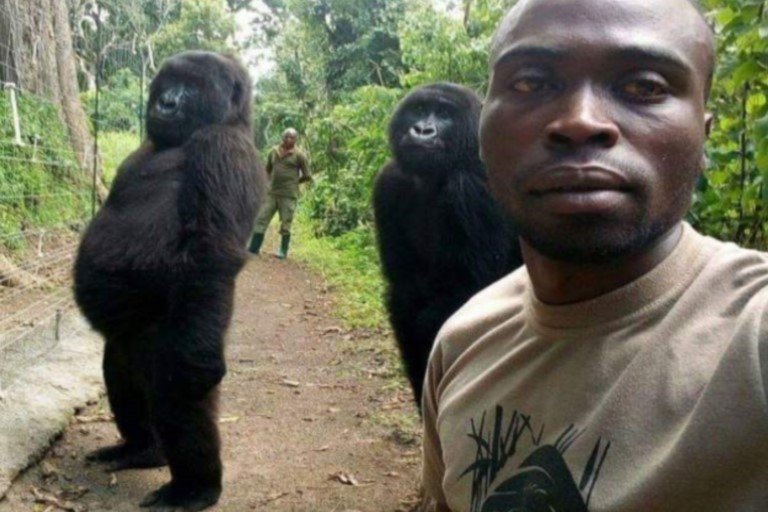 A gorilla photographed in 2019 posing for a relaxed selfie with rangers at an orphanage in the Democratic Republic of Congo’s Virunga National Park has died at the age of 14.

The mountain gorilla, named Ndakasi, died after “a prolonged illness in which her condition rapidly deteriorated”, the park announced.

“She died in the loving arms of her caretaker and lifelong friend, Andre Bauma,” it said.

At the time, the park’s deputy director told BBC Newsday that the gorillas had learned to imitate their carers, who have looked after them since they were found.

The gorillas, he added, think of the rangers as their parents.

Andre Bauma met Ndakasi when she was just 2 months old, just after she was holding onto her mother’s dead body. A decade later, Ndakasi has died holding onto Mr. Bauma.

In between those two embraces, Ndakasi rocketed to global fame.

In 2019, Ndakasi and another female mountain gorilla, Ndeze, photobombed a selfie taken by a ranger at the Virunga National Park in Congo, where they lived.

When the image was posted on Instagram, it went viral. It shows one park ranger, Mathieu Shamavu, in a T-shirt and posing for a selfie, the two gorillas behind him. One gorilla looks over her left shoulder, chin down, a just-another-day look on her face, peering toward the camera. The other is leaning forward, as if determined to make it into the shot, a hint of a smile at the edge of her mouth. Hayy! Behind them is another ranger, hands behind his back, peering intensely at the scene.

Ndakasi with her caregiver, Andre Bauma, a few days before her death on Sept. 26 at Virunga National Park in the Democratic Republic of Congo

“YES, it’s real!” the park wrote in a caption when the image was posted online. The photo delighted the internet and brought another round of attention to Ndakasi, who, by that point, had already lived a notable life.

She was born in 2007 as a member of the Kabirizi group, one of eight gorilla families living in the 3,000-square-mile park, which sits between Uganda and Rwanda. The year she was born, there were just 720 mountain gorillas on the planet, according to the park. Now, that number has grown to above 1,000, according to the World Wildlife Fund.

The mountain gorillas live mainly in forests in national parks in Uganda, Rwanda and Congo. Climate change, traps set to kill other animals, human encroachment and people with guns are among the gorillas’ biggest challenges to survival.

In April 2007, the Congolese park said its rangers had found Ndakasi “clinging to the lifeless body of her mother, gunned down by armed militia hours earlier.”

Ndakasi and another orphaned gorilla photobombed a selfie taken by a ranger at the Virunga National Park in 2019.

With no relatives of the infant gorilla present, rangers considered it too dangerous to leave her by herself. They took her to a rescue center, where she met Mr. Bauma, the park said. “All night long, Andre held the baby close to him,” the park said.

In 2014, he and the gorillas were featured in a documentary titled “Virunga.” By that point, Mr. Bauma and Ndasaki had grown close.

On Wednesday, the park announced Ndasaki had died on Sep. 26, after “a prolonged illness in which her condition rapidly deteriorated.”

On Thursday, the park said Mr. Bauma was not available for interviews.

But in a public statement, Mr. Bauma said that getting to know Ndakasi had “helped me to understand the connection between humans and great apes and why we should do everything in our power to protect them.”

“I loved her like a child,” he added, “and her cheerful personality brought a smile to my face every time I interacted with her.”