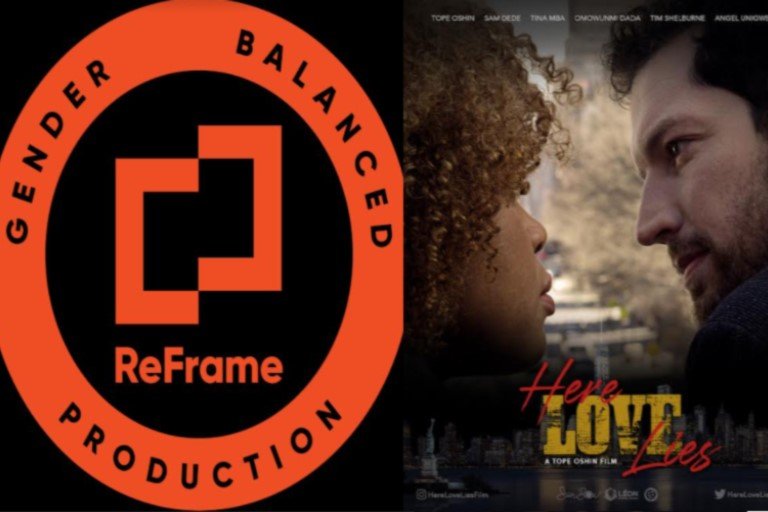 -Past honorees include Ava DuVernay and Gina Prince-Bythewood

The film which stars Tope Oshin in the lead role as well as Tina Mba, Sam Dede, Tim Shelburne, Omowumi Dada, Barbara Walsh, Angel Unigwe and Daniel Effiong alongside Moyo Lawal, has become the first African film to receive the ReFrame Stamp, an initiative by the Sundance Institute, Women In Film, and IMDBpro.

The stamp which was first awarded in 2018 is intended as a mark of distinction for projects that have demonstrated success in gender-balance; as well as to promote and recognize film and TV productions that hire female-identifying people in four out of eight critical areas of production: writer, director, producer, lead, co-lead, speaking parts, department heads, and crew.

As director of the movie, Tope Oshin joins an illustrious list of directors that include Gina Prince-Bythewood, Niki Caro, Cathy Yan, Ava DuVernay and Anna Boden (who collaborates with Ryan Fleck).

The official teaser for Here Love Lies which is classified as a romantic thriller on its official IMDB page was released on August 17, 2021 to positive acclaim.

Set in New York City and Lagos, Nigeria, Here Love Lies tells the story of a blogger whose quest for love, and subsequent online romance with an American leads to something much more. A collaboration between Tope Oshin’s Sunbow Productions and Daniel Ademinokan’s US-based Leon Global Media, the film finds Tope Oshin stepping in front of the camera, in the lead female role.

As part of the ReFrame stamp honor from Sundance, Women In Film, and IMDBpro, the film will be included in the ReFrame Stamp Recipients 2021 List on the official ReFrame website, and will be featured in the Awards section on IMDB.

Commenting on the award, Ms. Oshin, who has received critical acclaim for films like Up North, In Line, New Money and the MTV vehicle, Shuga noted that “Receiving this honor and recognition for the type of work I like to do, and have done in my filmmaking career, with women and about women, is indeed a huge blessing, and doubly so, to be in the fantastic company of leading filmmakers and films that have made, and are making great impact in the world. With the lovely and encouraging work WIF and Sundance are doing with the ReFrame Project, we can only move forward to do better, in hiring, supporting and continuing to tell resonant and strong gender-balanced stories.”

Herder, two others jailed in Ilorin for love scam