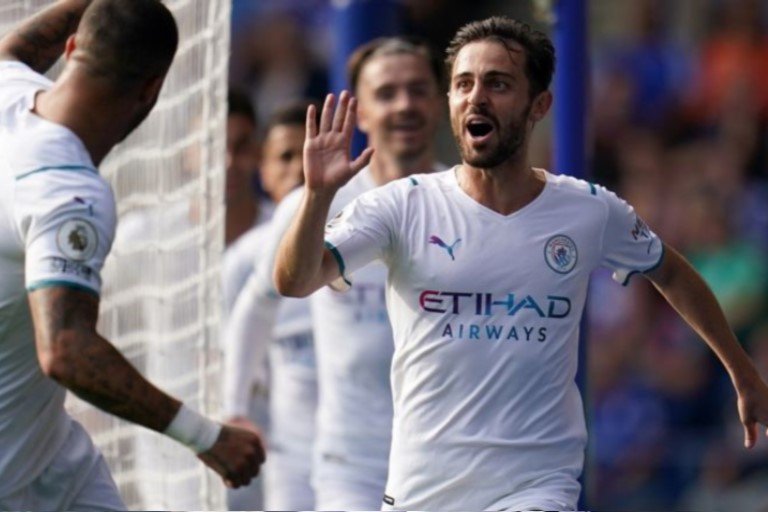 Goalkeepers Kasper Schmeichel and Ederson made crucial saves in a free-flowing match to keep their respective teams on level terms before Bernardo Silva’s close-range finish settled a fine contest.

The Portuguese pounced after Joao Cancelo’s shot was deflected by Caglar Soyuncu into Silva’s path.

At 0-0 Manchester City’s Ederson saved well from Harvey Barnes, while at the other end Gabriel Jesus was twice denied by Schmeichel.

Leicester created several chances, Barnes clipping the top of the bar with a header before Jamie Vardy had a goal ruled out for offside.

Silva’s goal means City have won all their games since starting the defence of their Premier League crown with a 1-0 defeat at Tottenham.

City spent £100m on British record signing Jack Grealish to give them another source of creativity but there was disappointment in their lengthy pursuit of Harry Kane, who is staying at Spurs.

It led critics to question whether they could win another title without a main striker.

But they continue to make progress and this was a job well done by Pep Guardiola’s side against determined opponents who will feel hard done by that they did not get something from a high-octane match.

That was partly down to Ederson, whose participation in this game had been in doubt along with Jesus.

The Brazilian duo were eventually cleared to play for their clubs this weekend after complaints about their failure to report for international duty were dropped – and both played key roles in their team’s latest win.

Ederson received a facial injury and required lengthy treatment after making a brave save to keep out Barnes before making a denying substitute Ademola Lookman late on.

At the other end, Jesus was lively and would surely have scored but for Schmeichel’s superb early save.

After making a losing start to the season, Guardiola’s side are beginning to hit familiar form.

By winning their first match away from Etihad Stadium since 14 May, they have made a perfect start to a testing week that sees them start their latest attempt to win the Champions League for the first time.

They will prepare for it on the back of a winning run and with confidence sky-high.