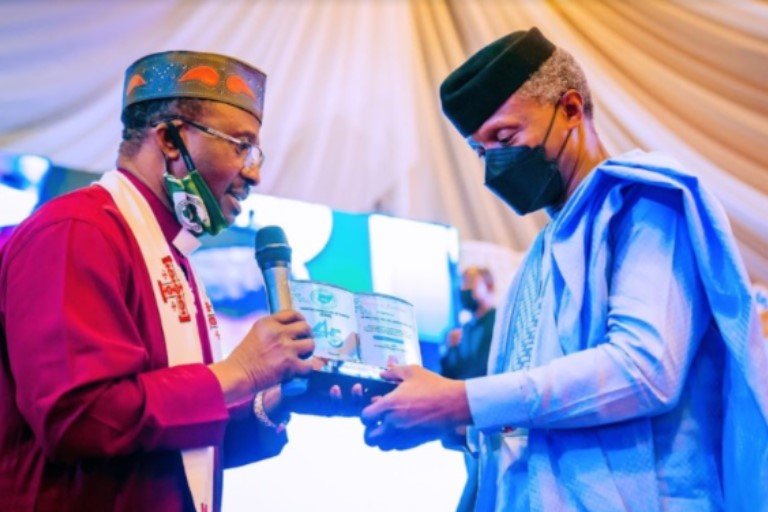 -Receives CAN award of excellence at body’s 45th anniversary, describes body as a force for peace, unity & social justice

-VP urges leaders to be relentless advocates of freedom of worship, justice & the rule of law

Vice President Yemi Osinbajo, SAN says that in pursuit of a more united and peaceful society, Christian groups and leaders of faith in Nigeria must preach fairness and equity at all times and be relentless advocates of freedom of worship, justice & the rule of law.

Prof. Osinbajo who was honoured with the Christian Association of Nigeria’s Award of Excellence at a Dinner and Awards night organized to mark the 45th anniversary of the association Saturday evening in Abuja, also delivered President Muhammadu Buhari and the Federal Government’s felicitations to the foremost Christian body on the milestone.

Also in his remarks after receiving the award alongside other honourees, the VP noted that “fairness, equity and respect for the rights of others are fundamental to peace, and security” hence Christian leaders at all levels must strive to promote those virtues despite the challenges.

His words: “we must continue to let the important truth be known that Christ did not come to establish a religion, nor to condemn men but to show all men that his own righteousness not our righteousness or performance is the qualification for eternal life.

“That the gospel commands consideration for the views of others treating them as we would wish to be treated, non-violent communication, that our words must be words of grace seasoned with salt.

“We must as an organisation and as individuals remain constant and relentless advocates of freedom of worship, respect for human rights, fairness, justice and the rule of law.”

Commending the works of current and past leadership of CAN in promoting religious tolerance, Prof. Osinbajo said “CAN has not only been continually faithful to its founding vision, it has become a veritable force for peace, unity and social justice.”

According to him, “pursuant to the gospel, CAN has consistently spoken up on behalf of the “least of these” in our society.

“Importantly, the current and past leadership of CAN have acted in full realization and recognition of their roles as pivotal stakeholders alongside the Government, the private sector in nation building.

“We are proud of the role of moral compass of society and interlocutor for peace among the different faiths that CAN has played and continues to play in our nation.”

Continuing, the VP noted that “we are also proud of the enormous work that the current executive of CAN ably led by His Eminence Rev Supo Ayokunle has done.

“I am aware of your collaboration with the leadership of the Islamic and other faiths, to reconcile where there are conflicts, to pacify where there has been offence, and to upbraid and reprimand where there have been misdeeds. Well done and congratulations.”

“An almost intemperate, vehement and often violent dismissal of the views of people of other persuasions without adequate consideration. At the same time there is the rise of identity and cultural politics. Brethren, the answer to hate, intolerance and conflict is the gospel of Jesus Christ.”

On the call by CAN for the renovation of the National Christian Centre, Prof. Osinbajo gave a short presentation on renovation plan work for the Centre, assuring that Christian groups and individuals would be mobilized to resource and complete the project.

Responding on himself and behalf of other award recipients, Prof. Osinbajo said “I accept the award with great humility, being mindful that we are not necessarily the most deserving of Christians to be given any recognition. But that because of the special grace of God by which we have been chosen to serve in the high capacities that we serve, we are in the advantageous position that our contributions will be more easily noticed.”

The VP dedicated the award to “the many who daily, in different locations: distant and near, propagate this message of the love and reconciliation of the gospel of Jesus Christ in sometimes difficult even life-threatening situations. And to the many who have suffered deprivation, and the families of those who have lost their lives by reason of their belief.”

Presenting the Award of Excellence to the VP, CAN President, Rev Supo Ayokunle, said the honour was in recognition of Prof. Osinbajo’s outstanding performance in public service over the past years both at state and national levels.

He said: “this Award of Excellence is conferred on you today in recognition of your invaluable contributions as an ideal Christian in the Nigerian political space and governance.”

The Imam that saved the lives of over 200 Christians in Barkin Ladi, Plateau State, Abubakar Abdullahi also received a special CAN recognition. It would be recalled that the VP had received the Imam in the Presidential Villa *in May 2019* and praised him severally in public for his acts of courage, sacrifice and tolerance when he stuck out his neck to protect Christians who were being pursued to be attacked during a conflict situation on *June 23, 2018.*

Speaking briefly during the event which was held live in Lagos, the VP congratulated the finalists of the SCAD competition as being among one of the best in Nigeria and anywhere in the world.

“Knowledge is so critical, and today, it is almost as if a completely new vista of knowledge has been opened, especially with technology and all of its various implications,” he said.