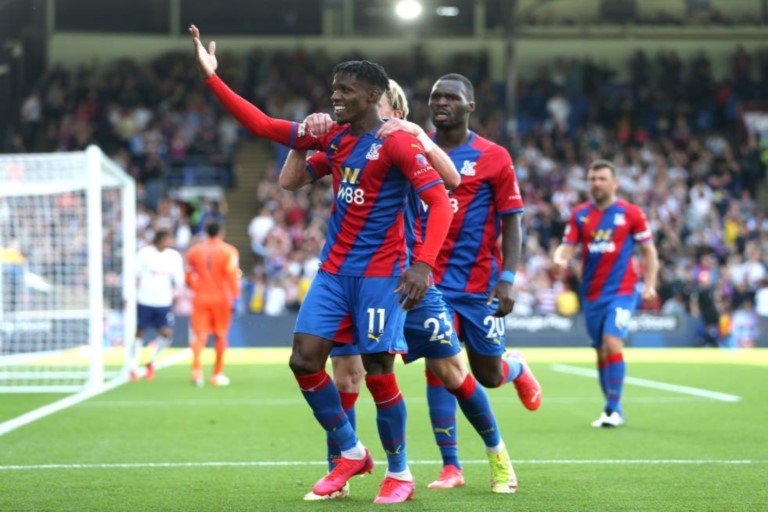 Wilfried Zaha set the Eagles on their way, rolling in from the spot after Ben Davies was penalised for handball, before substitute Edouard added a second and third late on.

French forward Edouard, a deadline-day signing from Celtic, introduced himself to the Selhurst Park faithful in fine fashion, turning in Zaha’s cross 28 seconds after coming on and then steering in Conor Gallagher’s pass.

The result moves Palace up to 11th in the table and it was no more than they deserved after a dominant display against the league leaders.

The hosts were well on top even before Japhet Tanganga’s dismissal, with the Spurs defender collecting two yellow cards in the space of five minutes before the hour mark.

That saw a second defensive reorganisation of the afternoon for Nuno Espirito Santo’s side, with Eric Dier hobbling off on 12 minutes after being on the receiving end of a clattering challenge by Palace’s Jordan Ayew.

Even so Spurs, who barely offered any threat of their own, had looked relatively solid until their late capitulation.

Palace’s problems in attack have been well documented over the past two seasons, when they have had one of the worst goalscoring records in the top flight.

They also began this match having managed just five efforts on target this season, the lowest of any club in the Premier League.

And while they displayed plenty of early endeavour, pressing forward for long periods, they at times looked short of ideas and the precision needed to unlock a well-drilled Spurs defence.

That is until Zaha scored from the spot and Edouard arrived to provide a new dimension.

His goal 28 seconds after coming on as a substitute is the fastest by a player on their Premier League debut and immediately highlighted his predatory skills, taking a touch to set himself before placing the ball into the bottom right corner.

Eight minutes later it was more of the same, raising hopes that Palace may finally have found a solution to a longstanding problem.