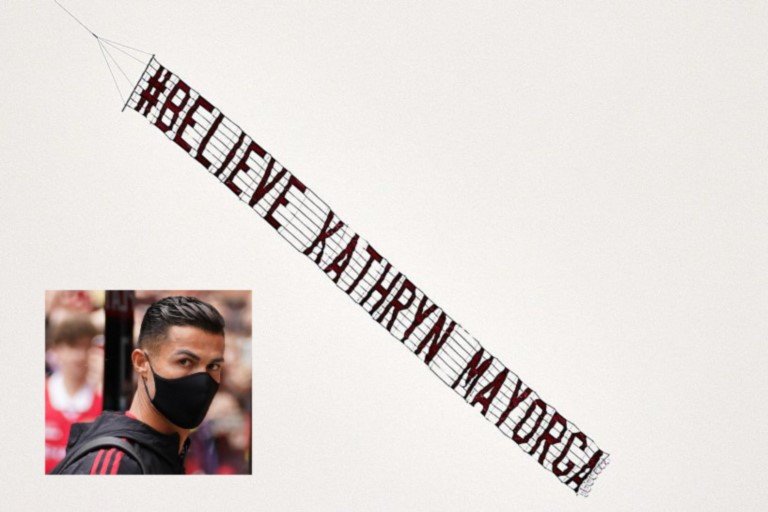 A banner supporting a woman who accused footballer Cristiano Ronaldo of a sex assault was flown over Old Trafford during his return game for Manchester United.

The Level Up feminist group said they wanted to “remind crowds” of rape allegations against him.

Kathryn Mayorga said she was assaulted by him at a Las Vegas hotel in 2009.

In 2019, US prosecutors said Ronaldo, who denied the claims, would not face charges.

A plane with the banner “Believe Kathryn Mayorga” was flown after the start of the game against Newcastle United.

The Portuguese forward scored twice in his first Manchester United match in 12 years, with the Reds winning 4-1.

Ms Mayorga reportedly reached an out-of-court settlement with Ronaldo in 2010, involving a £288,000 ($375,000) payment for agreeing never to publicise the allegations.

His lawyers have previously said the non-disclosure agreement was “by no means a confession of guilt”.

They said the player was following advice “to put an end to the outrageous accusations made against him, in order precisely to avoid attempts to destroy a reputation built thanks to hard work, athletic ability and behavioural correction”.

In 2018, Ms Mayorga sought to re-open the case, with her lawyer saying she had been inspired by the #MeToo movement against sexual violence.

Las Vegas police, who then investigated the allegations, said they “cannot be proven beyond a reasonable doubt” and therefore they would not press charges against Ronaldo.

A local district attorney’s office said Ms Mayorga reported an assault in 2009, but refused to state where it had happened or name the attacker, so police were unable “to conduct any meaningful investigation”.

Ronaldo has not denied that the two met but said the encounter, when he was about to leave his first Manchester United stint for Real Madrid, was consensual.

In 2018, he tweeted: “I firmly deny the accusations being issued against me. Rape is an abominable crime that goes against everything that I am and believe in.”

Level Up said they wanted to “disrupt the fanfare” around the player’s heavily-publicised return to Manchester United.

The group’s co-director Janey Starling said they wanted to send “a message to football that rape allegations can’t be kicked off the pitch”.