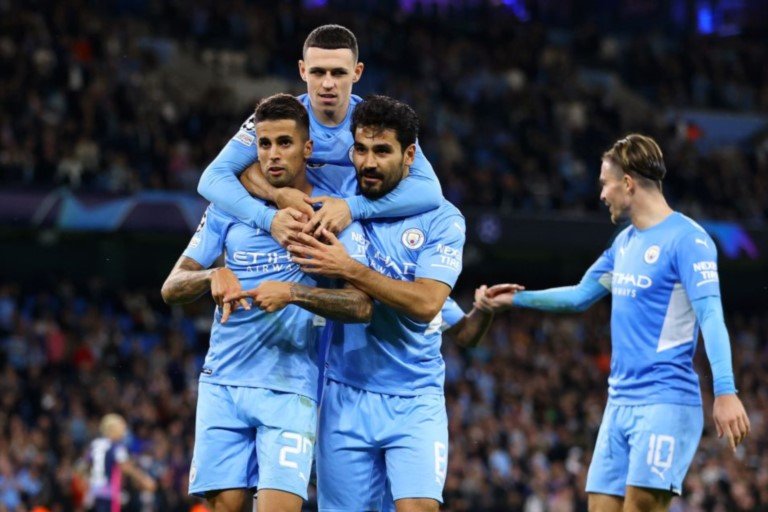 Jack Grealish scored a wonderful goal on his Champions League debut as Manchester City scored six past RB Leipzig to put the pain of losing last season’s final behind them.

City produced a stunning attacking display to overcome last season’s Bundesliga runners-up and get their Group A campaign off to a winning start.

Grealish, the British record £100m signing from Aston Villa, illuminated Etihad Stadium after cutting inside from the left before curling home to make it 4-2.

In an extraordinary game, Nathan Ake had put Pep Guardiola’s side ahead with a powerful header – the 10th different player to score in a City shirt this season – before a calamitous own goal by Nordi Mukiele doubled the lead.

The France defender got his angles horribly wrong as his attempted header back to his keeper following Kevin de Bruyne’s delivery ended up in the net.

City did not have things all their own way, however, and Mukiele made up for his error by playing a role in Christopher Nkunku’s goal to make it 2-1 before Riyad Mahrez restored the two-goal cushion with a penalty after Lukas Klostermann handled.

Nkunku gave RB Leipzig hope with a header only for Grealish to his score his second for the club with a delightful finish.

Former Paris St-Germain player Nkunku completed his hat-trick, but Joao Cancelo added a stunning fifth and substitute Gabriel Jesus a sixth to set City up nicely for their biggest test in the group away to PSG on 28 September.

RB Leipzig finished with 10 men after former Manchester City player Angelino was sent off in the 79th minute for a second yellow card.

Guardiola had urged his players before the game to use the hurt from losing last season’s final to spur them to go one step further this time.

In an astonishing match, they scored three times in each half to take their tally to 17 in the past four matches.

Nkunku’s hat-trick means that Guardiola was not entirely satisfied with what he saw but there were plenty of positives as City’s season continues to gather momentum.

De Bruyne did not look like a player making his first start of the season after injury, as the Belgium midfielder produced an electric performance, while Grealish looked like he belonged on the Champions League stage.

This was Manchester City’s highest scoring Champions League game, surpassing the eight goals in their 5-3 victory over Monaco in February 2017

The England midfielder continues to thrive in his new surroundings and delivered one of the game’s outstanding moments with his stunning finish.

After delivering the corner for Ake to score the game’s opening goal, Grealish became the first Englishman to both score and assist on their Champions League debut since Wayne Rooney in September 2004.

With Phil Foden coming on to make his first appearance for City since the Champions League final defeat, Guardiola’s side are looking stronger each game.

Ever the perfectionist, he will not be happy with the goals his side conceded.

Guardiola, in charge of City for the 300th time, was at his animated best as he delivered instructions to both Grealish and Mahrez as his side closed in on victory.

Messi fails to deliver as PSG draw at Bruges