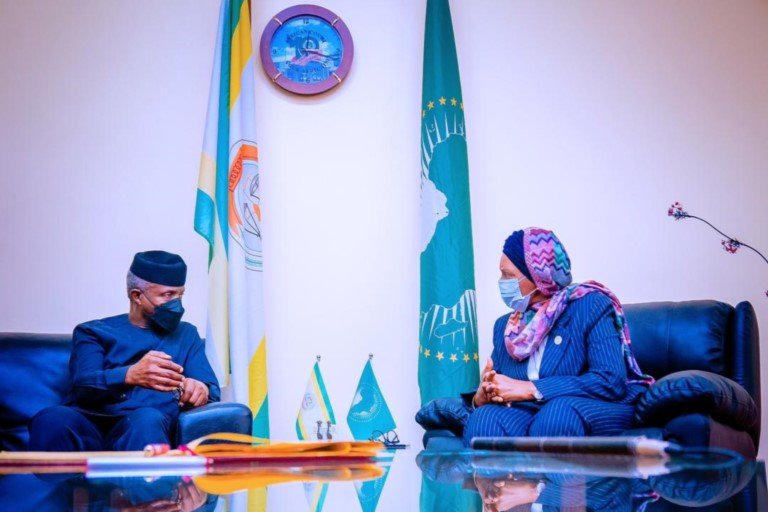 “I think one of the critical issues is more sensitization,” the VP noted during a meeting today with judges of the Court led by the President, Lady Justice Imani Daud Aboud, at the Arusha office of the AU judicial agency.

His words: “one of the critical issues is more sensitization among Member-States of the African Union. I think that more Countries would be more willing (to identify as required with the Court). I think that governments  just require more assurance especially on the issue of complementarity.”

Two years ago, in May 2019, Judges of the Court had visited Prof. Osinbajo at the Presidential Villa in Abuja.

Expressing his strong faith in the work of the Court, the Vice President averred “I believe very strongly in the International and Regional Court system, especially with respect to the protection of human rights”.

While noting the challenges faced by the Court, Prof Osinbajo said, “there will always be tensions and challenges because States will always be mindful of their sovereignty.”
Prof Osinbajo commended the achievements of the Court in spite of many challenges: “I really must commend you for the work you are doing, and landmark rulings of the court. Many have followed your work , especially when cases are about protection of the rights of women and freedom of information and I think there is consensus that the Court’s handling of these  cases has generally pointed in the right direction.”

He then observed that international and regional Courts of Justice and their rulings will also become increasingly important in the years to come as consensus grows around the fundamental importance of protection of individual and collective rights.

In her own remarks, Hon. Justice Imani informed the Vice President that one of the big challenges the Court faces is that more African States are yet to ratify the Protocol and make the Declaration under Article 34 (6). She however said that the Court was doing its best in the circumstance, and the 62nd Session of the Court would be starting next week to deliberate on cases before it.

Tinubu’s Presidency: A collective task for everyone – NDA