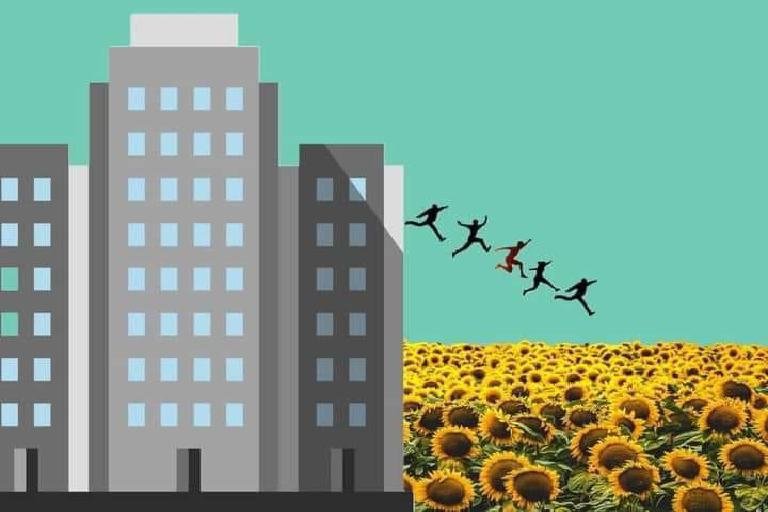 Five youths have reportedly died in Myanmar after jumping from a high rise building in Yangon.

The young activists (four men and a woman) who were trying to flee a raid by security forces preferred to jump to their deaths rather than be arrested by the military junta.

Two of the victims died on the spot while the other three were hospitalized before they finally gave up the ghost.

According to witnesses, the victims held hands together as they jumped. Other reports state that the soldiers had shot one dead before he fell to the ground

The young activists jumped from the roof of the building

The military overthrew the elected government of Aung San Suu Kyi in February, since when the country has been thrown into crisis with almost daily protests and fighting between the army and hastily formed militias.

Tuesday’s incident occurred in the Botahtaung district of Yangon, with media reports saying at least two died while the others were seriously hurt and taken to hospital.

The Myanmar Now news portal showed a photograph of three people lying motionless on the ground in an alleyway, while the U.S.-funded RFA (Radio Free Asia) said that all five involved in the incident – four men and a woman – had later died.

BBC Burmese and Myanmar Now said the five had jumped from a third storey.

Tin Zaw, the father of one of the victims, said in an interview with RFA that his 27-year-old son had been arrested by security forces in February but had with his help been released.

He said his son had never been interested in politics before the coup, but since the military takeover had tried to resist the junta.

“There wasn’t any big organisation behind him,” said Tin Zaw, adding that he was proud of his son.

Soe Myat Thu, the husband of a 29-year-old woman who was also believed to be among the dead, told Reuters that he had not yet received her body.

“I feel really sad that my wife died. She left a daughter behind,” he said by telephone.

The BBC Burmese language news service cited the military as saying the building had been raided after a tip-off that homemade bombs were being made and three others had also been arrested.

Reuters could not independently confirm what happened and a spokesman for the military did not answer calls seeking comment.

But reports of the incident have shocked many in a country that has become used to daily headlines about deaths and violence.

Memes about Tuesday’s incident went viral on social media including one that showed five silhouettes of people jumping from a building into a field of bright yellow sunflowers.

Myanmar protest leader and activist Thinzar Shunlei Yi said that the five appeared to have jumped rather than face the prospect of detention or torture if they were caught.

“If they could make it, they’d be free. If they couldn’t, they would die,” Thinzar Shunlei Yi said on social media.

Security forces have killed at least 965 people since the coup, according to the Assistance Association for Political Prisoners, a Thai-based activist group, though the junta has denied the toll is that high and said that many soldiers have also been killed.