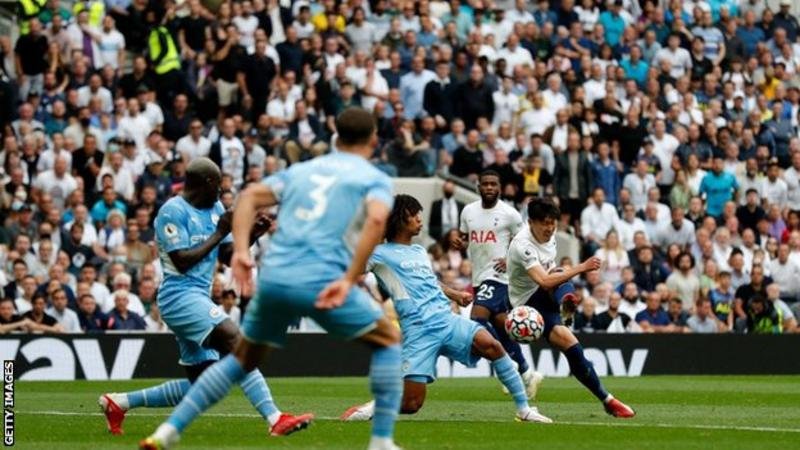 Kane was absent from the Spurs squad amid transfer speculation over a potential move to City.

But without him, Spurs marked new boss Nuno Espirito Santo’s first match in charge with a home victory in front of a full crowd, as Son cut inside from the right before placing the ball into the bottom corner.

Jack Grealish, who signed for a record £100m fee from Aston Villa, made his City debut but was unable to inspire a comeback.

Team-mates Joao Cancelo and Fernandinho came close in the first half, while Son also had a shot deflected inches wide.

Harry Kane has been at Tottenham since he was a schoolboy

Manchester City’s pursuit of England captain Kane gave this game an added edge – so how the home fans enjoyed victory against the club attempting to snatch away their main marksman.

And Spurs delivered exactly what their supporters, finally back inside their magnificent new stadium, wanted with this opening-weekend victory – the chance to taunt Manchester City and to remind Kane what he might be leaving behind.

Late on, those fans sent a chant of ‘are you watching, Harry Kane?’ reverberating around the Tottenham Hotspur Stadium.

And it was Son, the man who has been Kane’s partner in goals for so many years, who provided the flourish befitting this high-octane Spurs performance with a typical piece of skill and ingenuity to slide the winner low past Ederson.

Spurs players – and manager – Nuno rightly took the acclaim at the final whistle. The home side had heroes everywhere in match-winner Son, the outstanding defender Japhet Tanganga and the tireless Lucas Moura.

It remains to be seen how the Kane affair plays out but this will be the perfect psychological lift to Spurs that will sustain them until the saga comes to a close one way or the other.

Rusty Man City can have no complaints

Manchester City’s race appeared run long before the end of this game, with the early spark of promise snuffed out by the endeavour and skill of Spurs.

Grealish made some useful contributions early on but his day ended in the frustration of a yellow card and it is clear Guardiola, understandably, still has some work to do to integrate his talents into a squad already packed with creative ability.

One look at the City bench hinted at what Guardiola can introduce in the weeks ahead, even if Kane does not make the move to Manchester.

Kevin de Bruyne, Oleksandr Zinchenko and Gabriel Jesus were introduced in the final 20 minutes, while England’s Euro 2020 pair Kyle Walker and John Stones were unused substitutes, as were Aymeric Laporte, Rodri and Bernardo Silva – a formidable array of talent.

But nothing could save this over-complicated and listless City show with Benjamin Mendy showing yet again what a flawed figure he is at left-back while Nathan Ake was also uncomfortable.

And, significantly, City’s lack of punch, with the great Sergio Aguero now gone, may just have prompted Guardiola to look even further into the acquisition of Kane, especially as Chelsea, Liverpool and Manchester United have already given notice that there will be very little margin for error in the title race this season.