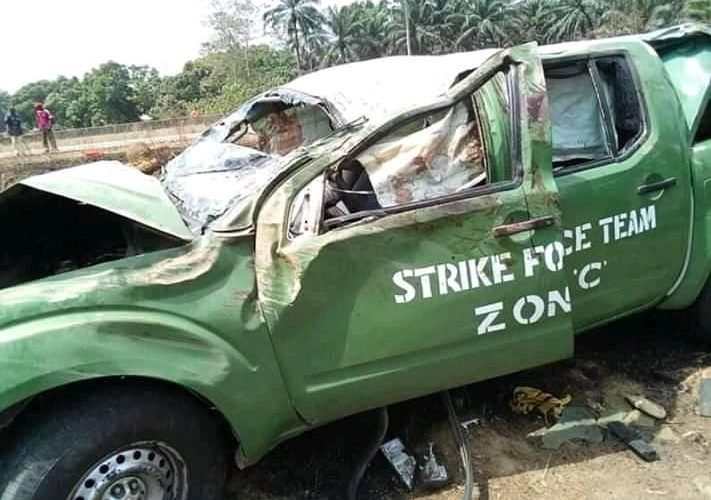 At least five people have been confirmed dead after a Nigeria Customs Service (NCS) patrol vehicle rammed into passersby in Kaduna state.

The unfortunate incident happened in the early hours of Monday morning in Jibia Local Government Area of Katsina state.

The Katsina state police command confirmed the incident. The spokesman of the command, Gambo Isa revealed that five people were killed on the spot while several others were in critical condition at the hospital.

“We have received a report that officers attached to the Border Drill Patrol followed a vehicle suspected to have been loaded with contraband,” he said.

“Unfortunately, the driver (of the Customs van) lost control of the vehicle and as a result, knocked down some people. Five of the victims died on the spot.”

Angry residents of the town – many of them engage in cross-border trades due to its proximity to the Niger Republic – reacted by burning a border patrol vehicle parked at the scene and another vehicle belonging to a man the Police PRO identified as Sani.

While the police put the number of deaths at five, some residents say the toll is most likely to be higher than that.

A resident of the town, Abdulrazak Jibia, who says he witnessed the incident, told newsmen that the accident happened after a strong dispute between the operatives and a businessman who was conveying a bag of foreign rice on a motorcycle to his village.

“The Customs officers pursued the man to arrest him upon sighting him from afar,” he said. “But the driver of the vehicle who was running on a high speed, unfortunately, ran the man over, along with 17 other people who are conducting their business by the roadside.”

The spokesman for the Katsina Command of the NCS, Danbaba Katsina stated that the operatives were not chasing anyone. Rather, he described the incident as an accident.

“What we know is that it was an accident that can occur to anyone,” he was quoted as saying.

“The accident occurred this morning after some of our officers finished eating and were returning to their checkpoint when their vehicle developed brake fault and it resulted in the accident.”