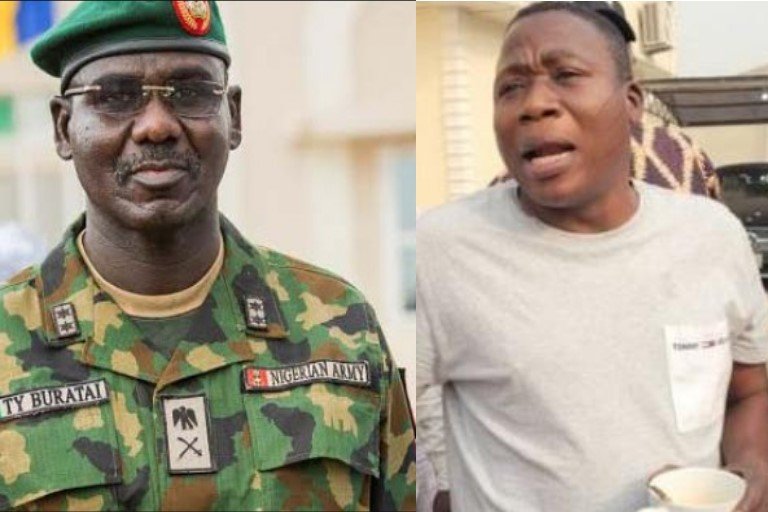 Facts have emerged on how Nigeria’s Ambassador to Benin Republic, Lt. Gen. Tukur Buratai (retd) facilitated the arrest of Sunday Adeyemo, popularly known as Sunday Igboho and his wife, Ropo, in Cotonou.

The Yoruba agitator and his wife, Ropo, were on their way to Germany through Benin Republic when they were stopped Monday night.

Igboho was on July 1 declared wanted by the Department of State Services (DSS) after his Soka residence in Ibadan was breached.

After the raid that claimed the lives of two associates, the DSS exhibited guns, bullets and other weapons recovered.

On July 9, Igboho, then in hiding, was placed on stop-list following intelligence about his plans to flee Nigeria.

According to intelligence officials in Benin republic, after DSS had declared Igboho wanted, Lt Gen Buratai seung into action by alerting the Beninese goverment to be on the lookout for Igboho.

By the time Igboho took possession of a doctored passport, the federal government got the information and increased surveillance.

Neighboring countries were alerted to BOLO (Be On the Look Out) and on July 19, the secessionists and Ropo were stopped at the Cadjèhoun Airport in Cotonou.

Working with the DSS and National Intelligence Agency (NIA), Buratai, who recently resumed as Nigeria’s ambassador in Benin, earlier wrote to the government of that country.

An officer told PRNigeria that Buratai insisted on the arrest and extradition of the self-acclaimed freedom fighter if he entered their territory.

The former Army chief’s letter to the Benin government was delivered through the Nigerian Embassy.

“On Monday, Igboho tendered his passport but immigration officers suspected the document and told him to wait. A search revealed his identity”, the source said.

Before he was appointed as Nigeria’s ambassador to Benin this year, Lt General Buratai was Chief of Army Staff since 2015. He had served as Force Commander of the then reconstituted Multinational Joint Task Force (MJTNF) in 2014 under the auspices of the Lake Chad Basin Commission and the Benin Republic. His operational deployments included Military Observer at the United Nations Verification Mission in Angola, Op HARMONY IV in the Bakassi Peninsular, OP MESA, OP PULO SHIELD, OP SAFE CONDUCT, MNJTF, OP ZAMAN LAFIYA, and OP LAFIYA DOLE.