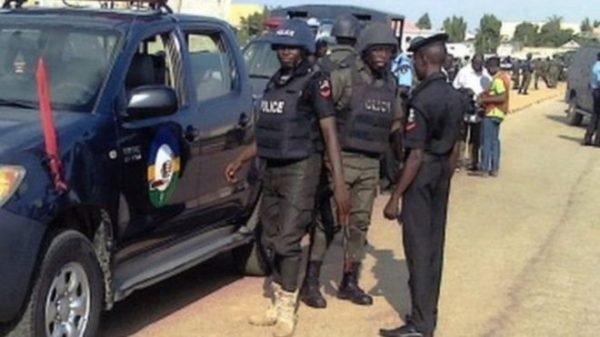 Ejiofor is a lawyer for the proscribed Indigenous Peoples Of Biafra (IPOB) lawyer.

Sources said the team of operatives included soldiers, operatives of the Department of Security Services (DSS) and policemen.

One of the Hilux vehicles that conveyed the operatives was set ablaze during the ensuing commotion, but it could not be immediately confirmed who lit the fire.

It was learnt that Ejiofor’s elder brother, driver and two others were abducted.

Ejiofor had earlier raised alarm on social media about the presence of security agents in his home.

It was leant that his assistant died in the commotion as gunshots rang out.

A source said: “We managed to Barr Ifeanyi Ejiofor on phone and he confirmed the attack, saying that soldiers, joined by Police and DSS operatives shot in different directions and were about to break into his main compound.”

The source said there were distressed voices of villagers and neighbours panicking and crying.

Police spokesman, Ikenga Tochukwu, could not confirm the incident.

But a Senior Police Officer, who spoke with our correspondent in confidence, confirmed the incident, saying one person died and one Hilux van burnt.

He said normalcy had been restored, adding that security agents had taken over the area.

IPOB spokesman Emma Powerful said in a statement: “It was around 2.30 am that they surrounded his (Ejiofor’s) country home. Is it an offence for someone to defend IPOB?

“Ejiofor is doing his job as a lawyer. Where in the world would a legal practitioner be harassed because he represents an organisation?”

“Since then, they are still trailing and harassing him. The whole world must hear this,” he said.