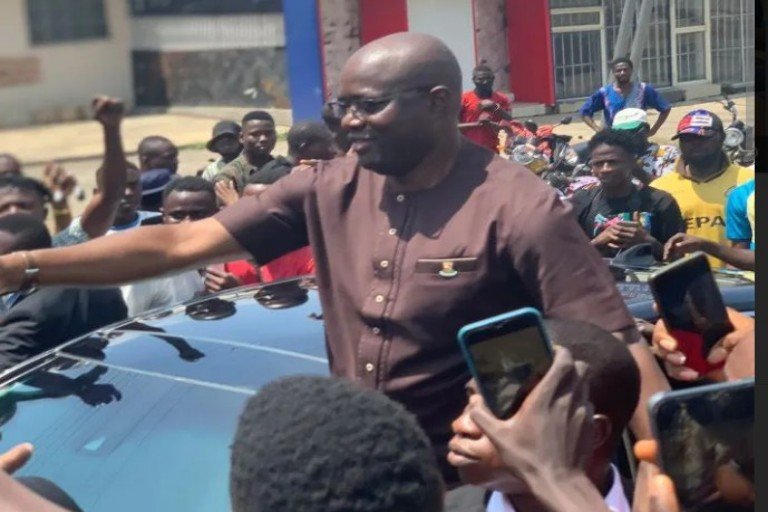 Oyo State Governor Seyi Makinde on Saturday joined hundreds of protesters who were expressing their grievances against the situation of the country.

It was gathered that the governor who was on his way stopped to cheer and address the protesters around Bodija area of the capital city.

The protesters had gathered as early as 7:30 AM at Mokola from where they marched to Sango enroute Ojoo area of the capital city.

In a viral social media video, the Governor was seen addressing the crowd with a large number of the protesters chanting his name.

It was gathered that the Governor commended the protesters for their peaceful conduct, reminding them that they were right to call their government to question when things were not done the way they should.

However, many streets were deserted on Saturday due to the fear of anticipated crisis around the state.

Those who were seen around also ensured that they did not go beyond the vicinity of their neighborhood for fear of crisis erupting around the town.

Areas like Beere, Oje, Oja’ba, Molete, Challenge, were also deserted as the roads were clear of usual traffic.

No protests were held around the axis, but activities resumed as the day came to an end.

It was also observed that ceremonies were still held in some places even though the atmosphere was tense.

While some markets were locked for fear, a few others that were open did not allow vehicles to drive-in and did not show readiness for business.

A group of angry youths also converged at Mokola Roundabout to protest and demand for a better Nigeria.

Heavy security presence was noticed in major parts of the city with a combined team of security operatives including men of the Nigerian Army, Police, Nigeria Security and Civil Defence Corps and Amotekun corps stationed at strategic locations in the capital city.

At the Mokola protest, the youths carried posters, placards and banners with different inscriptions conveying their displeasure in the situation of the country.

They blocked one side of the road but the blockade could not cause much damage to the ever-busy road as the usual heavy traffic on the road was absent.

Although the protesters were not violent in their approach, men of the Nigerian Army, Police and Civil Defence were fully on ground to prevent the breakdown of law and order.

A combined team of security operatives were also seen patrolling hot spots across the capital city to ensure that the situation did not escalate into a crisis.

Some inscriptions on their banners and placards read “The power of the people is stronger than the people in power”, “End impunity in Nigeria”, “RevolutionNow 2021: We are tired of the killings, insecurity, terrorism and poverty in the country, #Buharimustgo”, “Justice for Igangan,” among others.