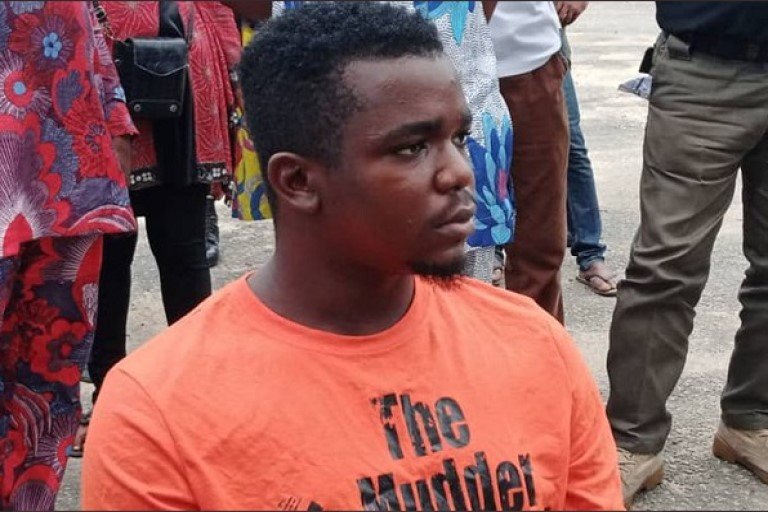 The prime suspect in the killing of Iniobong umoren was paraded on friday. The suspect, Uduak Akpan narrated how he murdered the job seeker by hitting her on the head with a stabilizer after raping her.

Akpan was paraded along with his father, Frank Akpan, in Uyo by the Akwa Ibom Police Commissioner Andrew Amiengheme, following a social media report that the suspect had committed suicide in custody to shield other suspects.

Iniobong, 26, was laid to rest on Friday in her hometown of Nung Ita Ikot Essien, Oruk Anam Local Government Area of the state amidst tears as Niger Delta Affairs Minister Godswill Akpabio and independent investigative journalist, David Hundeyin, launched into a war of words over allegations that Akpabio was using a hotel allegedly owned by the minister’s wife for illegal activities.

Hundeyin told Akpabio to stop threatening him with litigation after the minister asked him to withdraw his allegations or face law suit.

Akpan, who wore an orange tee shirt with the inscription ‘The Mudder Squad’ and appeared unperturbed, said it was true he invited Iniubong over for a fake job and then demanded to have sex with her.

His words: “What happened was that she came for the supposed job interview. I decided to use reverse psychology on her.

“I told her whether she can work in a farm where hard drugs are kept as a secretary. She said that she could; that she was ready to work.

“I told her this farm doesn’t exist; that is was just a hoax.

“I told her that before we could even start, I would like to have sex with her, and she agreed. But she gave a condition that I should use a condom, which I agreed.

“While I removed the condom, she became furious and picked the nearby stabilizer to hit me on my head. She bit my left ring finger.

“While I was bleeding, in a bid to stop her, I used the stabilizer also and hit her. And when I hit her, she fell down, and she died.”

He then proceeded to hit her in the belly.

According to Uduak Akpan, Iniobong was not the first victim of his ‘reverse psychology’, but she was the only one that died.

“It was not my intention to kill her, but if at the end of everything I am found guilty, I am ready to also die,” he said.

Asked about alleged shallow graves, clothes, books and other belongings of several victims in the compound, Akpan said there were no other victims.

“The NYSC pair of shoes belongs to my mother, and we used it for farm work,” he said.

“The books belong to me and my sister.”

He absolved his father of any form of involvement in the murder, saying he was neither around nor assisted him in any way to kill or bury the remains of the deceased.

Asked about his motive for inviting the lady to the house when there was no job, the suspect said: “I have had very bad experiences with runs girls and prostitutes. I asked whether she can work in a farm where hard drugs are kept and she accepted. She even told me she took marijuana and cocaine.

“I felt that that was the best way to revenge for the runs girls and prostitutes. I used to patronise prostitutes but now I don’t.

“I am not happy about what happened. But the commissioner of police has assured Akwa Ibomites and the entire world that justice will take its course.”

He said if the justice talked about by the police meant his life being taken, he was prepared to die.

His father, Frank Akpan, a retired director in the federal civil service, denied knowledge of the crime until he was invited by the police.

But he admitted that the house in which the murder was committed belongs to him.

He also denied knowledge of his son taking undue advantage of six girls in the compound.

He said: “I’m not aware of that. The reason is that we just relocated from Abuja.

“I have not been around for 30 years. We have been living outside.

“We just relocated because I’m retired. It is not even up to two years since we came back.”

He denied ever being in the business of selling human parts as alleged.

Asked to comment on the kind of justice he expects in the case, Mr Akpan stuttered and said: “I’m not happy about what my child has done. I don’t even believe this can happen to me after I sent them to school, tried to bring them up. Yea, justice can be done if the system so permits.”

Police Commissioner Amiegheme said he decided to parade the suspect to puncture the rumour that he had committed suicide in police cell.

He gave the assurance that the police would do their utmost to ensure that justice is not only done but seen to have been done, stressing that the police cannot cover up any crime in the state irrespective of who is involved.

He said he was “under pressure from within and outside Nigeria to reveal the truth behind the rumour.” He told of how he had “been inundated with calls all over the world that the prime suspect in the murder of Miss Iniubong Umoren has committed suicide in police custody.”

He said police investigation so far has not revealed any mass grave in the compound where the alleged murder of Iniubong took place.

He promised that diligent investigation was continuing and the case would be transferred to the Director of Public Prosecution (DPP) when all angles in the matter have been fully explored.

Iniubong’s relatives, friends and sympathisers were all tears yesterday as she was laid to rest in her hometown of Nung Ita Ikot Essien in Oruk Anam Local Government Area of Akwa Ibom State.

Also in attendance were students of the Faculty of Arts, University of Uyo where the deceased read Philosophy.

Despite a down pour, the funeral conducted by Faith Tabernacle Congregation, Ikot Ibritam District Oruk Anam, started at exactly at 10:50am, following the lying in state at her father’s compound.

The brother of the deceased, Mr. Ukeme Ephraim Umoren, appreciated members of the community, relatives and friends for coming from far and near to mourn with them.

He also commended the state government and security agencies for the support offered to the family in their moment of grief.

Fielding questions from newsmen, the House of Representatives member for Ukanafun/Oruk Anam, Mr. Unyime Idem, vowed that the brains behind the murder of Iniobong would be brought to book.

He urged the people of Oruk Anam LGA and the student community to remain law abiding even as relevant government authorities are working to ensure the deceased got justice.

Arc Ezekiel Nya- Etok and Chairman of Oruk Anam Local Government Area were among other dignitaries that graced the funeral.

The deceased had first been buried in a shallow grave in Nung Ikono Obio village in Uruan Local Government Area of the state by her alleged killer.

Independent investigative journalist, David Hundeyin, who blew the lid off Iniobong’s murder, yesterday told Niger Delta Affairs Minister Godswill Akpabio to stop threatening him with a lawsuit over his findings and publication on the killing of Miss Iniubong Umoren.

Hundeyin had in a series of tweets and other online publications alleged that the prime suspect in the murder was using an hotel owned by Akpabio’s wife, Unoma, in Uyo for nefarious activities.

Akpabio’s lawyer, Otobong Inyang, had written to Hundeyin demanding the retraction of the publication and an apology from the journalist within 14 days, failing which he would take legal action.

In the letter, Akpabio claimed the author’s publications gave the impression that he and his wife, Mrs. Ekaete Unoma Akpabio, were not only complicit in the death of Iniobong Umoren but were also members of a syndicate specialising in the procurement, sale and/or use of human body parts for rituals among others.

He said: “In the said report which you published on your Twitter handle @DavidHundeyin, Facebook Page/Timeline and on several online news channels/platforms such as NewsWireNGR of 1l/5/2021, e.t.c., you alleged that a certain Kufre Effiong was complicit in the alleged murder and also attempted to portray our clients as being members of an alleged syndicate responsible for perpetuating the dastardly act.”

The minister demanded retractions and public apology to be published in NewswireNGR, the author’s Twitter Handle, Facebook Page/Timeline and all other online news/media platforms and channels he used to publish the allegations.

However, the journalist, responding on his Twitter handle @DavidHundeyin yesterday, said: “Instead of sending old policemen to fight with me on TV or threatening me with lawsuits, just authorise Airtel and MTN to release the voice note of the conversation between Frank Akpan and Kufre Effiong. Very simple and will end this controversy. No need for plenty talk.”

Governor Udom Emmanuel of Akwa Ibom State has assured the people of the state that government would leave no stone unturned to expose the backers of Uduak Akpan, the prime suspect in Iniobong’s murder.

The governor, speaking during the 8th edition of ‘The Governor Speaks’ broadcast, expressed confidence in the ability of the security agencies to get to the root of the matter.

Emmanuel assured that his administration would do everything humanly possible to ensure that investigation is not compromised.

He offered his condolences to the bereaved family.