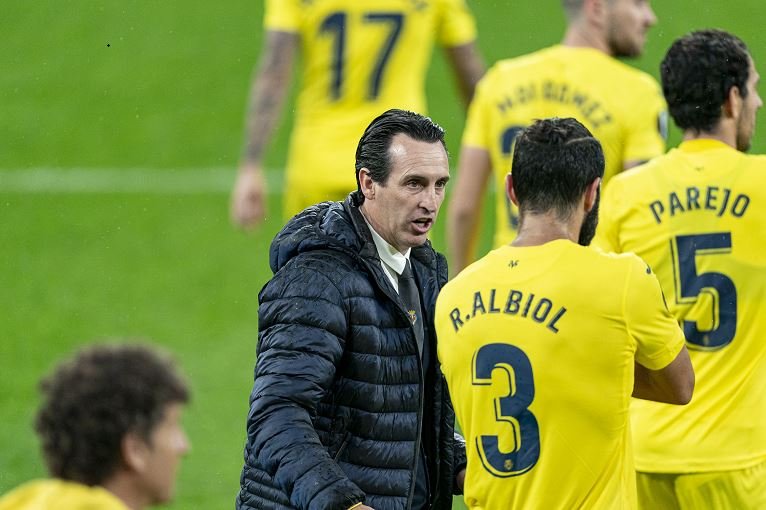 This was a disappointing contest lacking in quality and producing only three shots on target across 120 minutes – but drama arrived with the spot-kicks.

All 20 outfield players converted their penalties in an increasingly tense stadium, before Villarreal goalkeeper Geronimo Rulli blasted home his effort and then denied De Gea, who was crestfallen at the end.

This is for everyone who has been part of Villarreal history.

It gave Villarreal a first major trophy in their history and saw former Arsenal boss Unai Emery lift the Europa League for an unprecedented fourth time.

However, on the anniversary of both Sir Matt Busby’s birth and the epic Champions League final in 1999 that earned Ole Gunnar Solskjaer hero status among the Old Trafford faithful, there was to be no new 26 May landmark as United complete a fourth year without silverware.

United simply did not do enough, despite the massive gulf in transfer fees and salaries between the two clubs.

Solskjaer’s side did not start well and fell behind to a soft goal from Gerard Moreno.

Edinson Cavani dragged United level 10 minutes into the second period after a Marcus Rashford shot had been deflected into his path, but United failed to build on that momentum and by the end Solskjaer was introducing Juan Mata and Alex Telles purely to take penalties in the shootout.

Both players scored. Although given De Gea had failed to save any of the previous 21 penalties he had faced, maybe Solskjaer should have followed the example of former United boss Louis van Gaal, who famously brought on Tim Krul purely for a shootout at the 2014 World Cup, which the Netherlands went on to win.

For most of this season, no-one has been quite sure which United were going to turn up. It felt like that across the whole game in Gdansk, as they alternated between inventive and passive almost with each passing minute.

Evidently, Solskjaer felt he had no choice other than to stick with it.

In the final game of last season, he waited until the 87th minute of the semi-final defeat by Sevilla before making a change.

By then, his side were losing, so it was not a shock the Norwegian had not used any of the six he was allowed on this occasion as extra time began.

The brutal truth is, having gone with his strongest offensive starting XI, there was no-one on the bench Solskjaer felt confident could improve the situation.

In Cavani and Mason Greenwood, two of United’s best performers were attackers. But Rashford had a poor game, which was summed up by the England man failing to convert when Greenwood had given him a clear sight at goal.

Any goal would have been ruled offside but Rashford was not to know that as his scuffed effort rolled wide.

Scott McTominay’s midfield industry outshone both Bruno Fernandes and Paul Pogba, who both flitted in and out of the game without producing anything truly remarkable.

It would be easy to point to the absence of captain Harry Maguire as the key factor in Moreno’s opener.

But Maguire was on the pitch when United conceded a very similar kind of goal against Everton in February.

On that occasion it was Dominic Calvert-Lewin who slid the ball past De Gea as United’s defence failed to deal with a free-kick floated from a deep position into their penalty area.

This time Moreno’s run into the box went unchecked, allowing him to get in front of Victor Lindelof and turn Dani Parejo’s free-kick into De Gea’s goal.

It is the kind of routine situation Solskjaer’s team have been vulnerable to all season and seemed to be something Emery had worked out given the number of times Villarreal put themselves in situations to deliver such crosses, without quite getting their execution right.

Not that nervous United defending was limited to set-pieces. The sight of Eric Bailly attempting an overhead-kick inside his own six-yard box in the opening stages of the second period would have been only marginally less worrying had he actually connected with the ball.

It could be argued Solskjaer should have addressed the issue before now. Some may claim it was for the powers-that-be to deal with it for him.

Now, having failed to win a trophy in two and a half seasons as manager, the familiar questions about his own ability will follow the Norwegian around all summer.